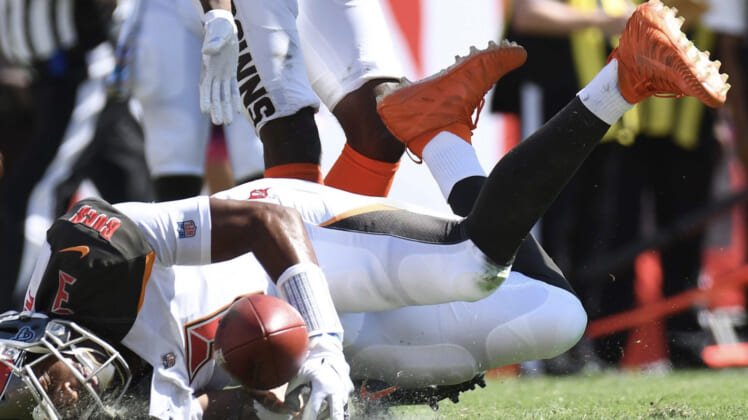 Tampa Bay Bucccaneers quarterback Jameis Winston has been a turnover machine since returning from a three-game suspension to start the season.

It didn’t get any better early on against the Bengals. With his Buccaneers driving in the first quarter after converting on a fourth down opportunity, it looked like Winston and Co. might take an early lead.

Instead, Winston threw this horrible pass intended for Mike Evans. The ball was intercepted by Bengals safety Shawn Williams, leading to yet another missed opportunity for the Buccaneers’ offense.

Jameis Winston picked off by Williams in the endzonepic.twitter.com/9xfh178yqP

Needless to say, those on social media did not go easy on the struggling former No. 1 overall pick.

Me very, very slowly getting off the #JameisWinston bandwagon over the last four years. #Bucs pic.twitter.com/k2HR7qDECQ

The first offensive drive for the #bucs ends with Jameis Winston throwing an interception. pic.twitter.com/ilwQUYOF3N

@JoeBucsFan @TKras “This just in, Jameis Winston turns the ball over”! pic.twitter.com/RAAmJkhBAe

Jameis Winston is not the quarterback to take the @Buccaneers to the next level. He’s proving game in and game out he’s a liability. Four seasons in… this should be his last as a Buc but let’s not kid ourselves. #Bucs #TampaBay

Jameis Winston has thrown an interception on 6 percent of his passes this season, twice his career rate. #Bucs #Bengals #TBvsCIN

Jameis Winston has played 48 games in his NFL career. He’s thrown 50 interceptions and fumbled 21 times. 48 games… 71 turnovers. He is what he is and if you expect it to change at this point.. that’s on you

Jameis Winston trying to give the Bengals an INT, finally succeeds pic.twitter.com/16ViqrEoyK

Yes, maybe it should be Ryan Fitzmagic time in Tampa. What say you?