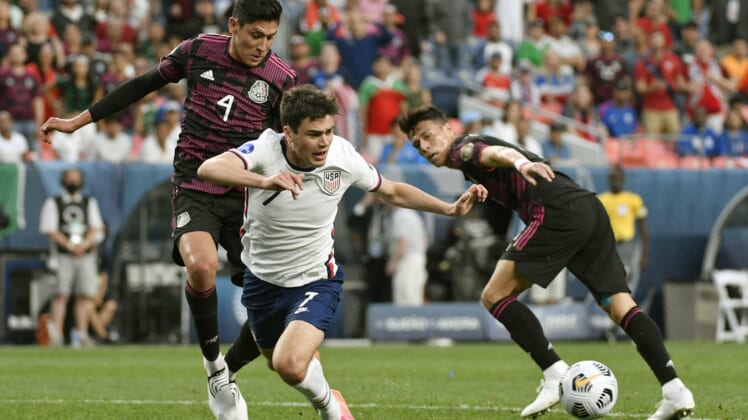 A fan who threw an object onto the field and injured United States men’s soccer player Giovanni Reyna has been arrested and banned for life from Empower Field at Mile High in Denver, the scene of Sunday’s CONCACAF Nations League final between the U.S. and Mexico.

Stadium Management Co., which operates the venue, made the announcement Monday night. The U.S. won Sunday’s game 3-2 in extra time.

“Sunday’s CONCACAF Nations League final at Empower Field at Mile High between the United States and Mexico was an exciting, historic match played in front of an international television audience and a capacity crowd,” the statement said.

“While the night showcased Denver as a world-class soccer destination and Empower Field at Mile High as a premiere sports and entertainment venue, the actions of a few patrons unfortunately took away from a memorable event. In addition to ejecting several individuals for violating the fan code of conduct, our security staff worked closely with the Denver Police Department to identify five people who were arrested — four for trespassing and one for throwing projectiles.

“The person arrested for throwing an object on the field was identified through security footage as being responsible for injuring a U.S. player. Along with facing criminal charges, this patron will be banned from all future events at Empower Field at Mile High.

“Empower Field at Mile High is fully committed to providing a safe, welcoming and inclusive environment for all participants and fans. Our fan code of conduct will continue to be strictly enforced to ensure a positive experience for everyone.”

Reyna left with trainers after he was struck by an object, and he later returned to the field for the trophy celebration.

Fans tossed cups and water bottles from the stands after Christian Pulisic scored what turned out to be the game-winning goal for the U.S. Some in the crowd also used an anti-gay chant, which led to a pause in the game as players from both teams told the crowd to stop.

U.S. manager Gregg Berhalter said he was disappointed in the crowd’s actions.

“Total lack of respect for what’s happening on the field and all effort that both teams are putting into the game,” Berhalter said. “I think (Reyna is) going to be OK, but he did take something to the head, and it could have been a lot worse.”