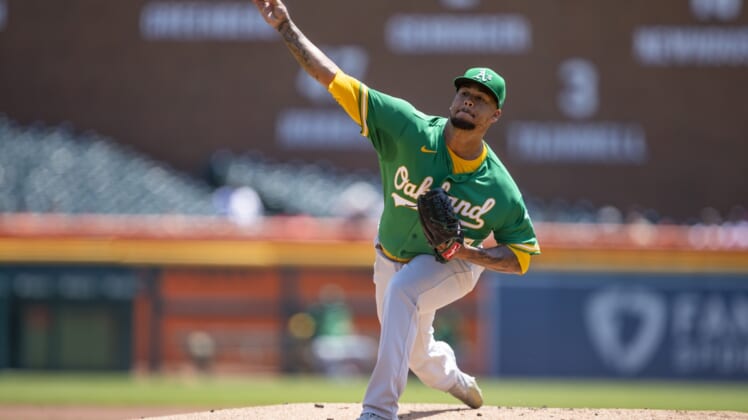 Two pitchers who have dominated Sunday’s opponent, but with vastly different results, will go head-to-head when Patrick Sandoval and the Los Angeles Angels complete a four-game road series against Frankie Montas and the Oakland Athletics on Sunday.

The Angels ran their recent hot streak to eight wins in their past 11 games by taking two of the first three in the series against the A’s. That includes a 9-1 victory in the nightcap of a doubleheader Saturday after letting the opener slip away on a three-run, walk-off home run by Oakland’s Luis Barrera.

It was Barrera’s first home run in the major leagues.

Sandoval (1-1, 2.03 ERA) has pitched brilliantly in four career starts against the A’s, but has only a 0-3 record to show for it despite a 1.89 ERA. The left-hander, in three starts last season vs. Oakland, was 0-2 despite allowing just three runs in 15 2/3 innings with 13 strikeouts.

The 25-year-old demonstrated that kind of form to all three April opponents this season, going 15 innings in three starts without allowing an earned run. He went 1-0 in those games.

But he hasn’t been nearly as sharp in May, roughed up for six runs and 13 hits in 11 2/3 innings in his two starts.

Chances are Sandoval won’t have to deal with Oakland’s Game 1 hero, Barrera. He has been sent to the plate just one time this season to face a lefty pitcher.

A’s manager Mark Kotsay was excited for Barrera, but not thrilled with the prospects of having to return to the ballpark on Sunday for a third game in 24 hours.

“I got here at 8 this morning and I will be leaving here about 10:30 tonight,” he lamented between games. “But it’s baseball, right? It’s part of our game.”

While the A’s went all-out for a sweep, Angels manager Joe Maddon had a bigger picture in mind when he gave Mike Trout and Anthony Rendon most of Saturday’s first game off.

“It’s just a cumulative kind of thing for me,” he said. “Everything’s interconnected. So just try to stay with the plan, give the appropriate rest. It’s still May. I do believe that you reap the benefits in August and September if you take care of people right now.”

Sandoval can only hope for the type of support starter Michael Lorenzen got in Saturday’s nightcap. Taylor Ward smacked a grand slam and Shohei Ohtani hit a two-run homer to lead the nine-run assault on Oakland pitching.

For Ohtani, it was his 100th career home run.

The Angels haven’t had much success against Oakland right-hander Frankie Montas (2-3, 3.77), who has a career 4-1 record and 2.30 ERA against Los Angeles in 13 games, including 10 starts.

Montas’ duels with Ohtani often have been memorable, however. The slugger has two home runs and seven RBIs among six hits in 18 at-bats.