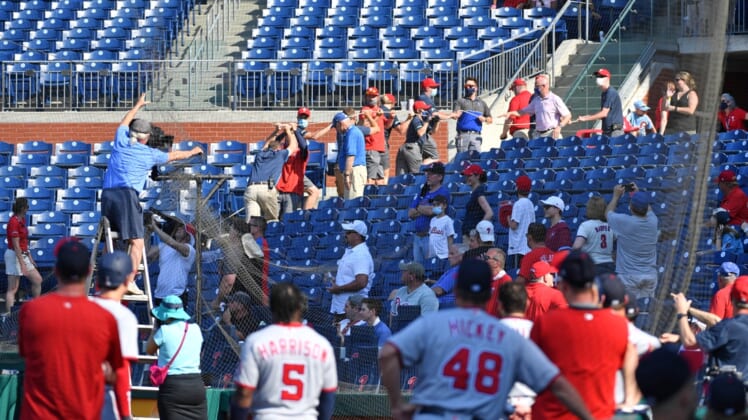 Jun 6, 2021; Philadelphia, Pennsylvania, USA; Members of the Philadelphia Phillies Grounds Crew pull the safety netting back into place after it collapsed during the eighth inning during their game against the Washington Nationals at Citizens Bank Park. Mandatory Credit: Eric Hartline-USA TODAY Sports

Sunday’s game between the Washington Nationals and Philadelphia Phillies was delayed just over 20 minutes in the eighth inning when the protective netting behind home plate and along the baselines collapsed.

After a pitch was thrown by Philadelphia’s Cristopher Sanchez to Trea Turner, the netting fell. The umpires immediately halted the game and conferred with the Philadelphia stadium staff.

Some of the netting landed on the field and some of it was in the stands.

The staff was eventually able to get the netting back up and the game resumed, with the Phillies eventually winning 12-6.