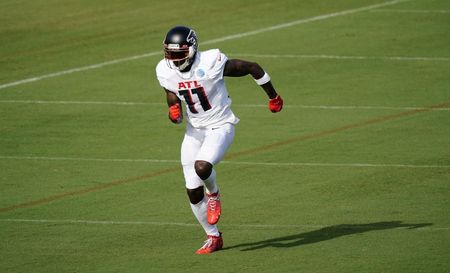 Jones, 31, aggravated his ailing hamstring in Atlanta’s 40-39 loss to the Dallas Cowboys on Sept. 20. He sat out last Sunday’s 30-26 setback to the Chicago Bears with the injury.

Jones recorded 11 catches for 181 yards through the first two games without a touchdown grab. The seven-time Pro Bowl selection and two-time first-team All-Pro has 12,306 yards receiving and 57 touchdowns for his career.

Ridley, who had five catches for 110 yards versus the Bears, is dealing with an ankle injury.

The 25-year-old Ridley has 21 receptions for 349 yards and four touchdowns in three games this season. He has 148 catches for 2,036 yards and 21 touchdowns in 32 career games with the Falcons.

Wide receiver Russell Gage likely will see an additional workload should Jones and/or Ridley be unable to play on Sunday.