If there were any questions about how low outside expectations of the Atlanta Falcons are ahead of Sunday’s game at the Tampa Bay Buccaneers, here’s a headline from one website: “Can Atlanta Even Force a Punt?”

It seems like a dumb question, but given that the Falcons hacked up 434 yards and 32 points last week in a blowout home loss to Philadelphia, it does make one wonder what indignities Tom Brady’s offense might inflict on them.

That Tampa Bay is a 12-point favorite seems a bit light, but as hundreds of cliche-spouting coaches and Chris Berman wannabes might tell you, that’s why they play the games.

“Defensively, coach (Dean) Pees has been around forever and he’s got every trick in the book,” Buccaneers coach Bruce Arians said of Atlanta’s defensive coordinator. “So we’re going to have to be ready for them.”

Tampa Bay’s offense has certainly been ready for anything a defense can throw at it. Its 31-29 win in the Sept. 9 season opener against Dallas marked the eighth straight win, including playoffs, where it scored more than 30 points.

If the Buccaneers do it again Sunday, that will break the league record set by Brady’s New England Patriots in 2007 and tied in 2010 by New England. 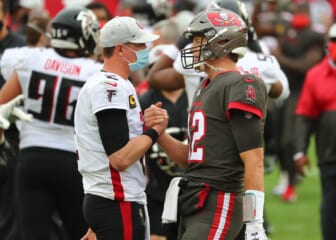 And there was a sense that Tampa Bay left multiple scores on the field. It won despite four turnovers — two of them Brady interceptions — and 11 penalties. What’s more, top receiver Mike Evans was limited to three catches on six targets for 24 yards.

Yet in the end, none of it mattered. Brady finished with 379 yards and four touchdowns on 32-for-50 accuracy. Antonio Brown and Chris Godwin each went over 100 yards receiving, while Rob Gronkowski looked like peak Gronk from his Patriot years with eight catches, 90 yards and two scores.

“Mike doesn’t see single (coverage),” Buccaneers offensive coordinator Byron Leftwich said of Evans. “We’ll move him around and get him in position to allow him to make plays, but I wouldn’t freak out after one game. That’s just football being football.”

New Atlanta coach Arthur Smith might wish he had the weapons he left behind in Tennessee — A.J. Brown, Derrick Henry, Ryan Tannehill — let alone the ones he has to watch from the other sideline.

Instead, what the Falcons have are veteran quarterback Matt Ryan, explosive receiver Calvin Ridley and a roster full of guys either filling spots until someone better comes along or someone younger is ready.

What emerged from that mix against the Eagles was a painful watch. While there were positives, such as a combined 103 rushing yards from Cordarrelle Patterson and Mike Davis, there were also a dozen penalties, three sacks and only 260 total yards.

Smith is playing the long game with this roster, as he can afford to do in his first year on the job. With some young players occupying key spots, Atlanta is offering on-the-job training — to a point.

“I am always going to give guys a chance to correct themselves,” he said. “But if somebody is a repeat offender in that? Then you have to make a decision.”

The good news for the Falcons is that they had no one listed on Wednesday’s injury report. Tampa Bay put four players on its injury report and only one — OLB Jason Pierre-Paul (hand) — was limited. 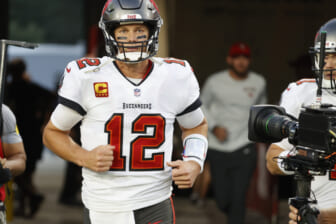