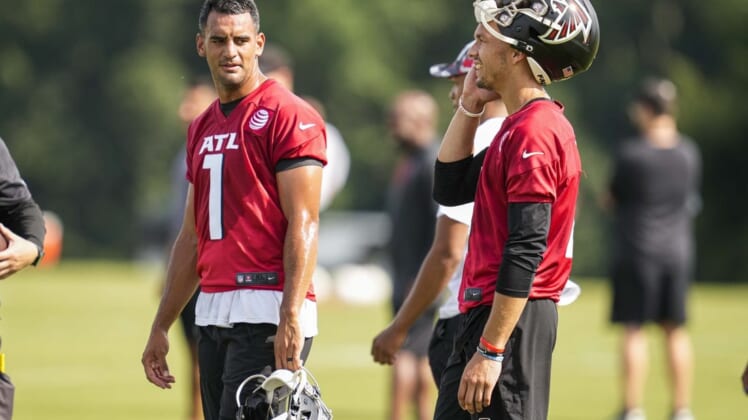 He knows the coach, the system and the league, so it’s no great surprise Marcus Mariota opened Atlanta Falcons training camp as the only quarterback working with the first-team offense.

Rookie Desmond Ridder was informed by head coach Arthur Smith in April that the Falcons plan to open with Mariota and take it from there, allowing Ridder to observe and develop at his pace — barring an injury to Mariota.

“It’s a great opportunity for me to prove to myself,” said Mariota. “I feel very comfortable. Being around Art for all that time in Tennessee, I think that’s where it comes from. For the most part, I feel really comfortable and confident.”

For the first time since Matt Ryan was drafted No. 3 overall in 2008, the Falcons enter a season looking for the right answer at quarterback.

Falcons quarterbacks coach Charles London erased doubt about the depth chart on Wednesday when he declared Mariota the starter.

“Obviously, we’ve got a plan for each of them. Marcus is the starter,” London said. “That’s how we’re going into this thing.”

Part of that decision is taking time to measure Ridder’s progress. Ridder said the system “just came to me” even though he expected to struggle to translate the NFL playbook in his first season.

Smith, who coached Mariota with the Titans and benched him in 2019 in favor of Ryan Tannehill, said the plan is subject to constant review.

“Marcus has been in Coach’s Smith system before, so he knows a lot more,” said Ridder, the 74th overall pick in the 2022 draft. “I am really trying to learn from him, and learn about how he goes about learning the game plan and learning how we do things each and every week.”

Mariota has experience, but rust might also play a factor in where he stands this summer. He logged 89 snaps in the only two NFL seasons (of seven) he spent with the Raiders and without Smith. Mariota’s last NFL start was in October 2019.

Ridder shocked Smith with his approach to the playbook, film study and general preparation in the offseason. Smith said last month that Ridder isn’t a typical rookie in many ways.

“Behind the scenes, the things that he has done, as a rookie, really from the neck up,” Smith said. “How he’s operating, when we’re doing the rookie walk-throughs, when we do these installations and on the field, and his command. Then you’re betting on some of the physical things you see at times to catch up. He’s light years ahead of most young quarterbacks, in terms of playing from the neck up.”