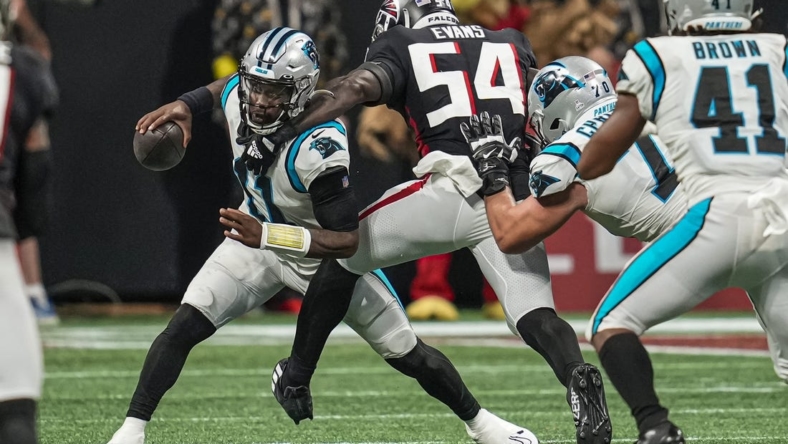 A quick turnaround might be exactly what the Carolina Panthers and Atlanta Falcons need.

The NFC South foes return to action Thursday night in Charlotte, N.C., two weeks after a 37-34 shootout between the same teams in Georgia.

The Falcons (4-5) coughed up a lead in Sunday’s 20-17 home loss to the Los Angeles Chargers to give up ground they gained in the NFC. But with little time to lament missed opportunities, Atlanta swiftly fixed its focus to the Panthers.

“We have a big division game ahead on Thursday night,” Falcons safety Richie Grant said. “It’s a must-win.”

The Falcons pulled out a 37-34 overtime victory against the Panthers, who twice had potential game-winning kicks go off the mark. Preparing scouting reports might not be as complex as a normal short week in the case.

“Thankfully, we just played Carolina and we’re very familiar with them,” Falcons coach Arthur Smith said. “It doesn’t mean it will be the same thing. They’ll adjust their plan and we’ll have to adjust ours.”

There’s a lot going on with the Panthers (2-7). But like their division foes, Carolina doesn’t have much time to dwell on it.

Interim coach Steve Wilks said it’s critical that the team keeps tabs on following through and trusting the process, which is part of the reason he’ll ride with quarterback PJ Walker. Walker had a 0.0 quarterback rating with two interceptions and three completions when he was benched for Baker Mayfield last week.

The Panthers faced a 35-point halftime deficit, which became a 42-21 loss Sunday at Cincinnati.

“We all have bad games,” interim coach Steve Wilks said. “PJ (Walker) wasn’t the only one. I could bench everybody if we go off bad games.”

The Panthers were mostly torched by the Bengals’ ground game, something that could be concerning as the Falcons are adding to their arsenal in that area.

The Falcons didn’t have running back Cordarrelle Patterson for the Week 8 meeting with Carolina. Patterson is back from a knee injury.

But what has been most disturbing to Atlanta is the inability to click consistently on passing plays. Rookie Drake London has cooled after a torrid start and tight end Kyle Pitts hasn’t made much noise. Pitts does have two career games with five-plus catches against Carolina, and he scored a touchdown against the Panthers two weeks ago.

“I’ve got to do a better job of giving our guys opportunities to make plays,” quarterback Marcus Mariota said.

Carolina could be close to full strength defensively.

But Carolina cannot seem to cure its chronic ailment at quarterback. Walker had a career-best 317 yards Week 8 and is being granted a fifth consecutive start.

“We’ll see exactly how things to week-to-week from there,” Wilks said. “We’re going to rally behind PJ and definitely give him the things he needs.”

Mayfield played the second half in relief, completing 14 of 20 passes with two touchdown passes. Sam Darnold was added back to the 53-man roster this week, so that’s another option at quarterback.

The Panthers could have safety Jeremy Chinn back after a hamstring ailment has sidelined him for six weeks. Wilks said he would be cautious in determining his status.

Falcons offensive lineman Matt Hennessy will miss the game with a knee injury after going down Sunday.