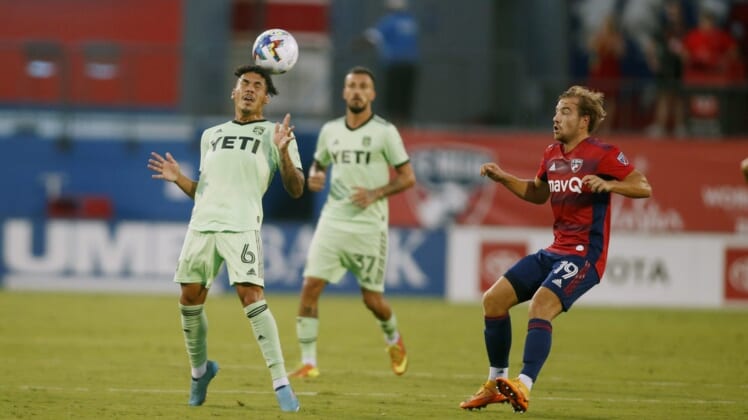 Diego Fagundez’s late goal lifted visiting Austin FC to a 1-1 draw with FC Dallas on Saturday in a Texas Derby match in Frisco, Texas as the surging second-year side extended its lead atop the Supporters’ Shield standings to two points.

Austin (12-4-5, 41 points) stretched its unbeaten streak to seven matches but had a four-game winning run snapped. Austin has taken 17 of a possible 21 points in its past seven outings and earned the Copa Tejas, the competition between the three Texas teams by beating Houston twice and drawing with Dallas both at home and away this season.

Fagundez tied the game in the 79th minute, taking a pass from Sebastian Driussi and dribbling once to steady the ball before lifting a shot over onrushing Dallas keeper Maarten Paes and three defenders, all of whom were left in a pile on the pitch after trying to stop Fagundez’s shot.

Dallas’s Paul Arriola opened the game’s scoring when he turned around a pass from Jesus Ferreira for a goal in the 42nd minute. Ferreira’s assist somehow went through the legs of Austin defender Julio Cascante to Arriola, who beat Jon Gallagher to the ball and squeezed his shot between goalkeeper Brad Stuver and the near post.

Both sides had chances to score in the early minutes but failed. Dallas’ Arriola and Matt Hedges, the latter from the ground, clanged shots off the right goalpost in the seventh minute. Austin’s Sebastian Driussi ripped a shot off the crossbar in the 22nd minute.

Dallas (7-6-8, 29 points) hasn’t won since beating Orlando City SC at home on May 28. It was just the second time over its past five home matches that Dallas has produced points, following a 2-2 draw against Houston on July 9.

Austin played without coach Josh Wolff on the sidelines. Wolff was placed in COVID health and safety protocol about an hour before kickoff.