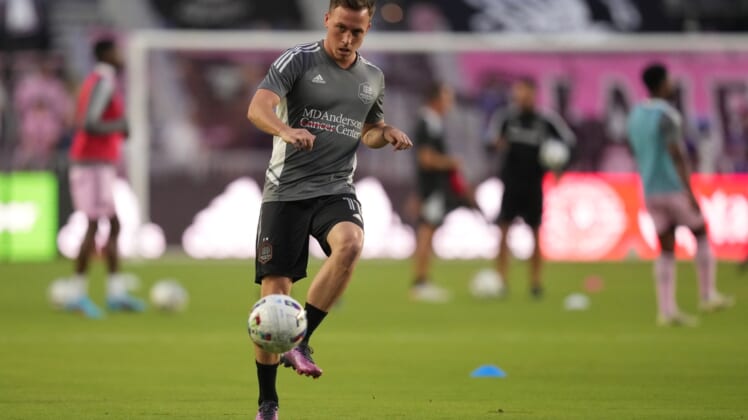 It was the first road victory of the season for Houston (2-1-2, 8 points), which is unbeaten in its past three matches. Inter Miami (0-4-1, 1 point) is the only winless team remaining in the Eastern Conference and has the fewest points of any MLS team.

The match began late due to a 1 hour, 58 minute weather delay at DRV Pink Stadium.

And the host side had a clear advantage in the first half in terms of scoring chances. But despite taking 12 shots, only two of which were on goal, Miami came up empty.

Quintero, who leads Houston with three goals this season, drew first blood when he scored in the 49th minute on a header just in front of the goal off a perfectly placed cross by Griffin Dorsey.

Eight minutes later, a high-arching ball into Miami’s 18-yard box drew out goalkeeper Nick Marsman, who tried to clear it. But Quintero controlled the ball when Marsman knocked it down and then was fouled inside the box by Inter Miami’s keeper.

That set up a penalty kick, which Picault converted to put Houston ahead 2-0.

In the 65th minute, fortunes were reversed when Miami’s Robert Taylor was fouled in the box by Houston goalkeeper Steve Clark. Gonzalo Higuain converted the ensuing penalty kick to pull Miami within a goal. It was only the third goal of the season for the Herons, who have been outscored 13-3 in five matches.

But Miami was unable to score the equalizer despite outshooting Houston 22-11 overall. Picault iced the outcome with a second goal in stoppage time in the 93rd minute.

One of Miami’s best chances in the first half came in the 41st minute when Taylor took a back-heel pass from Higuain and fired a shot that sailed just wide of the goal.