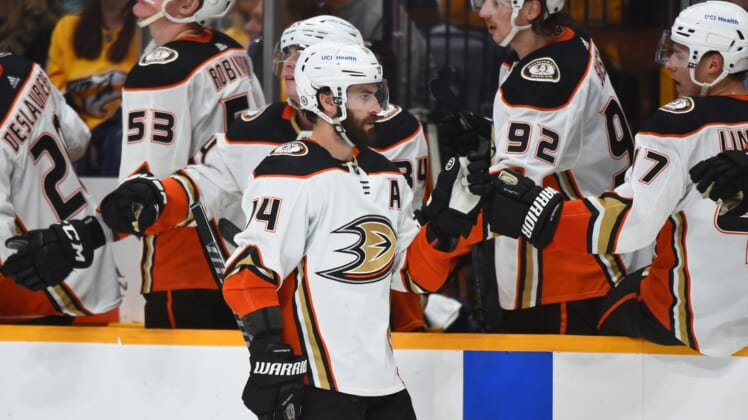 Time is running out for the Anaheim Ducks to get serious about a potential playoff bid.

The Ducks have dropped the first two games of a crucial five-game road trip and next face the New Jersey Devils at Newark, N.J., on Saturday night.

Anaheim got blown out by the Chicago Blackhawks 8-3 in the opener of the road trip on Tuesday and wasn’t much better in a 4-1 loss to the Nashville Predators on Thursday.

To make matters more difficult, the Ducks were without forwards Trevor Zegras (upper-body injury), Jakob Silfverberg (undisclosed) and Ryan Getzlaf (lower body) to start the game against Nashville. Forward Sam Steel then left late in the third period after getting hit in the face with the puck.

“It’s hard when you’re missing a lot of guys,” Ducks forward and points leader Troy Terry said. “Especially (Zegras) and (Getzlaf), who bring that offensive side to us.”

Whether any of those players will return was undetermined on Friday. Anaheim recalled forwards Danny O’Regan, Vinni Lettieri and Buddy Robinson from San Diego of the American Hockey League before the game on Thursday and none had much of an impact.

Despite the patchwork lineup and mini losing streak, Ducks coach Dallas Eakins isn’t about to throw in the towel on the season.

“We never want to accept losing and this is about winning each and every day,” Eakins said.

The Devils are coming off a 2-1 loss to the visiting Winnipeg Jets on Thursday night, eliminating the possibility of winning three in a row to match their season-high win streak.

New Jersey gave up the go-ahead goal in the final minute of the second period and was unable to solve Winnipeg goalie Eric Comrie in the third. Comrie was making just his 10th start of the season.

“There’s sometimes games like this where we just have to find a way,” Devils forward Pavel Zacha said.

The Devils were without center Nico Hischier, who missed his second straight game with a lower-body injury.

Jack Hughes continues to be the hottest player for New Jersey. Hughes has 19 points (seven goals, 12 assists) in his past 12 games.

The Ducks could be close to getting veteran defenseman Josh Manson back from injury. He has been out since Jan. 29 with a finger injury but has been practicing lately.

The Ducks picked up another big defenseman, 6-foot-8 Andrej Sustr, off waivers from the Tampa Bay Lightning last week and he made his team debut against the Predators, totaling one shot on goal, two hits and two blocked shots in 18:54.