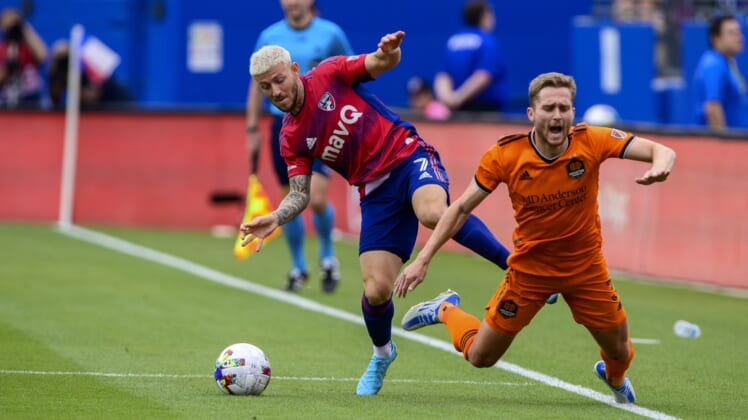 Facundo Quignon’s stunning goal three minutes into second-half stoppage time was the winner as FC Dallas scored twice in the late stages to beat the Houston Dynamo 2-1 Saturday in Frisco, Texas, in this season’s first rendition of the Texas Derby.

Quignon waited at the back post for a corner kick from Alan Velasco and was unmarked, easily pushing the deciding goal past Houston keeper Steve Clark to allow FC Dallas to complete an unlikey comeback.

The Dynamo broke through in the 33rd minute, scoring when Sebastian Ferreira sent a centering pass from Adam Lundqvist past FC Dallas goalkeeper Maarten Paes and into the net.

Ferreira was just inside the 6-yard box and used his right foot to steady the feed from Lundqvist before ripping the volley past the Dallas keeper. It was the lone shot on goal for either team in the first half.

Dallas nearly produced the equalizer in the 67th minute on its first shot on goal as Velasco’s blistering left-footed shot from outside the box was turned away by a diving save from Clark at the right post.

Clark then made back-to-back saves in the 78th minute, first on a headed attempt by Jose Antonio Martinez after a corner kick and then on the rebound of that save by Franco Jara.

Dallas continued to press the pace when Jara clanged a header off the right post in the 84th minute. FC Dallas finally found the net three minutes later when Tsiki Ntsabeleng pushed a rebounded shot from Marco Farfan past Clark for the tying goal. It was Ntsabeleng’s first MLS goal.

That set the stage for Quignon and his last-minute tally.