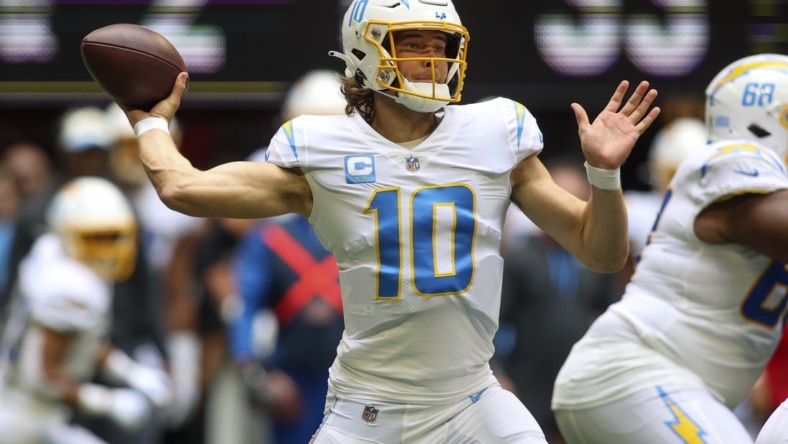 The Los Angeles Chargers will be in their comfort zone Sunday night when they hit the road to take on the San Francisco 49ers.

During what has been a half-season of inconsistency, the Chargers (5-3) have at least shown they are comfortable away from home and will head to Northern California this weekend with a three-game road winning streak.

On the other side of the field, the 49ers (4-4) return to play after their bye week. Despite playing without Deebo Samuel in Week 8, the 49ers continued their dominance over the Los Angeles Rams when the defense rose to the occasion in a 31-14 victory.

The Chargers returned from their bye week on Sunday and won at Atlanta 20-17 when rookie kicker Cameron Dicker split the uprights on the final play of the game. It was the third kicker Los Angeles has used this season after injuries to Dustin Hopkins and Taylor Bertolet.

Third-year Chargers quarterback Justin Herbert continues to show consistency, throwing for 281.8 yards per game with 13 touchdowns to five interceptions. Despite playing through fractured rib cartilage, he is on pace for just under 4,900 yards passing after throwing for 5,014 yards and 38 TDs last season.

“He feels a lot better and that counts for a lot,” Chargers coach Brandon Staley said. “I really felt he was playing (at Atlanta) the way he can play and was just really in control of the game plan. … I thought he made good adjustments and was a good decision maker and made fast decisions and played really well in the clutch.”

The Chargers’ issues on offense include injuries to the wide receivers as well as a disappointing rushing attack that has averaged 89.1 yards per game. Los Angeles is one of five teams rushing for less than 90 yards per game.

Receivers Keenan Allen (hamstring) and Mike Williams (ankle) did not practice Wednesday, with Staley insisting Allen is day-to-day. Linebackers Troy Reeder (ankle) and Amen Ogbongbemiga (groin) were limited. Defensive lineman Austin Johnson was lost for the season after he fractured his knee and sprained his MCL against the Falcons.

“He’s going to stay with us and he is going to be a key contributor, helping these guys throughout the rest of the season,” Staley said.

The 49ers expect to have Samuel back this week after he was a full participant in practice Wednesday. Samuel, who has two receiving TDs and one rushing, missed the Week 8 victory over the Rams with a hamstring injury.

“We’ve got five guys who can touch the ball so the more people have to worry about those five guys the better,” Shanahan said. “You have two guys (Samuel, McCaffrey) who are a little bit interchangeable at different positions but they both can play the other one’s position.

“It makes a little more space and it makes it a little bit more of a threat for whoever gets the ball in their hand.”

Linebacker Dre Greenlaw (calf) returned to practice Wednesday but was limited after also sitting out in Week 8. Defensive tackle Arik Armstead has a hairline fracture in his right leg that will force him to miss time.

Since taking over the quarterback position from an injured Trey Lance, Jimmy Garoppolo has been up to the task with 241.6 passing yards per game and 11 TDs with four interceptions, but the 49ers are just 3-3 in his six starts.