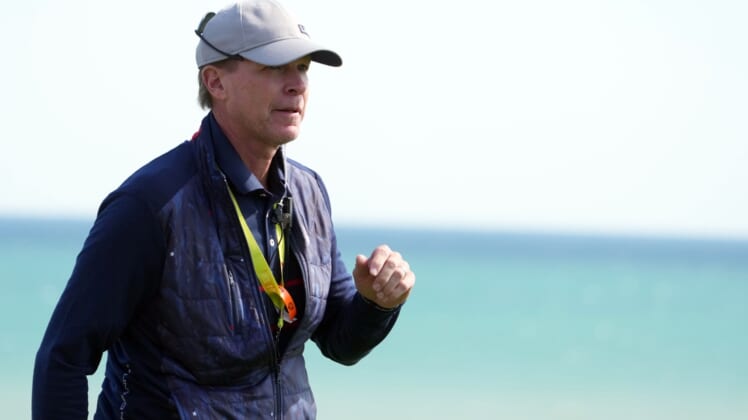 Steve Stricker opened the first major of the PGA Tour Champions season with a 7-under-par 65 on Thursday, earning a two-shot lead at the Regions Tradition in Birmingham, Ala.

The 2021 U.S. Ryder Cup captain is aiming to win his fourth senior major and his second Regions Tradition. He broke through in Birmingham at the 2019 edition of the event.

Stricker, 55, dealt with what he termed a “mystery illness” over the winter that hospitalized him and caused him to lose 25 pounds. He didn’t return to competition until late April, making the early lead more impressive.

“It’s great to be out here playing again is my mentality,” Stricker said. “I have a little different perspective after going through what I went through so I’m just enjoying it now a little bit more and having fun with it. I’m still trying to get my body back to where it was. That will be ongoing for a while, but I feel really good and I’m doing some good things on the course.”

Jimenez, the 2018 Tradition champion, racked up seven birdies to offset a pair of bogeys. A win this week would be his third career senior major and his third overall victory this season.

Short, a 58-year-old with only two wins on the 50-and-older circuit, made six birdies against just one bogey.

Eight players shot 4-under 68 to form a large tie for fourth, including John Daly and South Africa’s Ernie Els. Steven Alker of New Zealand, who has three wins on tour since November, also shot 68 thanks in part to an eagle at the par-5 13th hole.