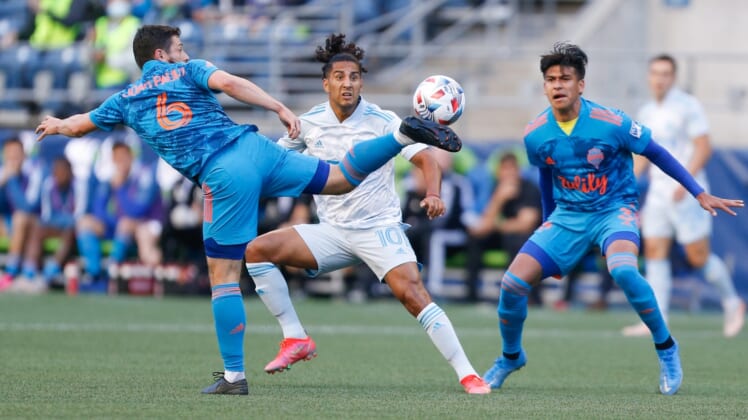 Brad Stuver made two saves as expansion Austin FC played to a 0-0 draw with the host Seattle Sounders on Sunday night.

It was the second consecutive home draw for the Sounders (5-0-3, 18 points), who are atop the Major League Soccer standings.

It appeared the Sounders had broken through in the 75th minute when Fredy Montero put the ball in the back of the net. Joao Paulo gained possession just outside the penalty area, dribbled down the left wing and made a cross for Raul Ruidiaz, who was closely marked by a defender at the near post. The ball squeezed through to the far post, where Montero made a sliding attempt at the ball and knocked it in. But the play went to a video review and the Sounders were ruled offside.

Austin’s best opportunity came in second-half stoppage time, when Tomas Pochettino wound up for a shot from just outside the top of the 18-yard box. The low shot was aimed directly at Cleveland, however.

Ruidiaz had a chance for Seattle late in the first half, but his sidewinding, left-footed shot from the left edge of the 18-yard box sailed just over the crossbar at the far post.

Austin (2-4-1, seven points) had lost its previous three matches, scoring just once in that span, during its season-opening, eight-game trip. Austin has one more road game, June 12 at Sporting Kansas City, before finally opening its new Q2 Stadium on June 19 against San Jose.

The Sounders were again without playmaking midfielder Nicolas Lodeiro, who has played just 24 minutes this season. Lodeiro recently had arthroscopic surgery on his right knee.

Frei, who has missed the past three games after suffering a sprained left knee, will be out indefinitely after developing a blood clot as a complication of the injury.