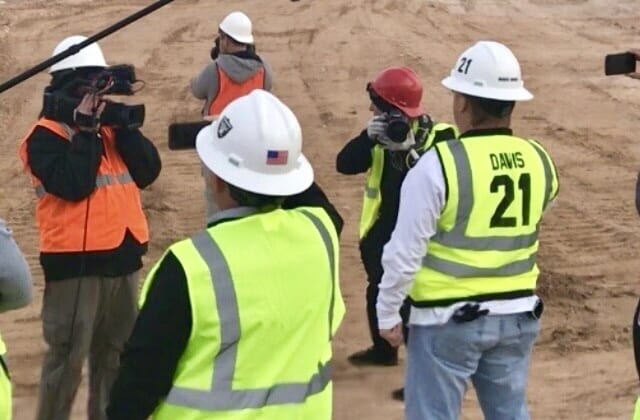 On Friday afternoon the Oakland Raiders owner visited his team’s future stadium now under construction in Las Vegas. He not only visited, but he also participated in some explosive activity.

The construction of the Oakland Raiders new stadium in Las Vegas is in full swing with heavy concrete and steel work due to begin this summer. The $1.9 Billion project is finally bringing to reality the dream of the team’s owner Mark Davis to build his storied franchise a true state-of-the-art stadium it has always lacked, including under his legendary father and owner Al Davis.

Davis, and Raiders President Marc Badain, were in town to see progress on the stadium site and to get their hands dirty as well.

As the video shows, Davis (wearing the safety vest number 21 with his last name on the back; Badain wearn #511) arrived on the site in time to have some explosive fun. As crews continue to blast through the difficult desert soil, Davis was able to pull the switch himself in areas where the stadium’s main bowl will be situated, helping soften the caliche below ths surface.

As we reported a few weeks ago, a contract has already been awarded on the cement and concrete work which will get underway within weeks. The vertical structure (steel and concrete moving upward) should begin to take shape late in the summer.

This next week is also an important one as the Las Vegas Stadium Authority Board will again meet to finalize the stadium development plan before taking it to the NFL Owners Meeting, at the end of March in Orlando, for league approval. The meeting will be a pivotal one for Las Vegas and the Raiders to get the contractual agreements and approvals done to continue to move ahead on the project.

The stadium is scheduled to be completed in the spring/summer of 2020 with the Raiders playing their first preseason game in the facility in August of the same year. With Las Vegas’ climate, there are not expected to be any delays on the aggressive time table to complete the project.

The Las Vegas Raiders Report will be covering the meeting and will bring you both written content and video from the meeting on Thursday.