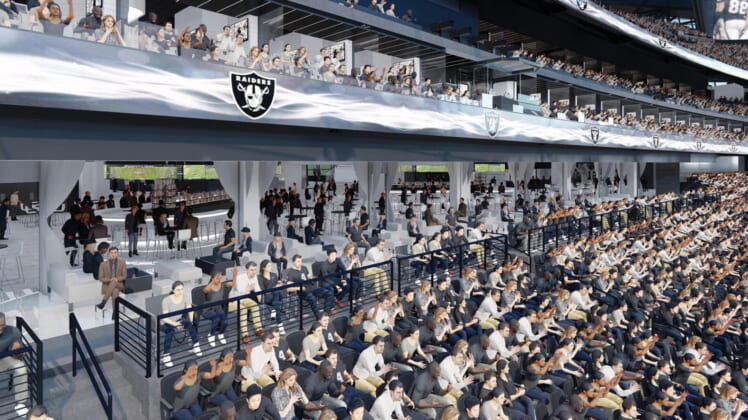 A view of the Club from the Club Level seating can be seen in this image.

With the Las Vegas Raiders new Allegiant Stadium is moving ahead at full speed, fans have been wondering what the cost for a Club Level season-ticket holder might be. With a state-of-the-art facility forthcoming for perhaps the NFL’s most storied franchise, we take an inside look.

The following images and Allegiant Stadium pricing was obtained through a season-ticket holder in Oakland who plans to purchase seats in the new Las Vegas stadium just a stone’s throw from the Las Vegas Strip. Although we reported on possible pricing at the end of last year, this is the first concrete pricing structure of just how premium these areas will be.

The Raiders have said all along they would build Allegiant stadium that gives fans one of — if not the best — game-day experiences in the NFL. Said to rival AT&T Stadium in Dallas, the images below show just how grand the high-end Club Level seats should be.

The first image shows a cutaway of the entry to the Club Level coming from escalators leading from the main concourse:

The second image shows the lobby area a Club Level patron would encounter entering the area in the new Allegiant Stadium.

Next, a wide angle shot and overview shows the expanse of the entire Club Level area in the exclusive seating location. Complete with bars, seating areas and other amenities, access will be available for all Club Level ticket holders.

The Club Level restaurant and bar area will also have tables and seating for fans who would like to watch the game from the dining area. The photo also below shows some of the private Suite Level, located just above Club Level.

Here’s a look at the field and from an Allegiant Stadium Club Level seating perspective. The pricey seat options will have one of the most advantageous views of any NFL stadium. Allegiant Stadium is built to provide the best sightlines available.

So, what is the cost for this level of viewership in the new Las Vegas stadium? It isn’t for the faint of heart or the typical fan, but it is in line with recent pricing at other new NFL stadiums. In fact, it’s almost exactly the same as fans pay for in Atlanta’s new Mercedes-Benz Stadium, home of the Atlanta Falcons. Atlanta’s median income is almost precisely the same as Las Vegas. The Raiders say they expect many Club Level patrons in the new Las Vegas stadium to come from Oakland and Southern California.

If a season-ticket holder would like to arrange a payment plan at 6 percent interest, here’s the breakdown of pricing with financing.

What are the benefits that accompany these seats besides the amenities of the Club?

Here’s a list of general benefits for PSL purchasers.

We will bring you more on the Las Vegas stadium news and ticket pricing in the coming months on the Silver and Black Today.