Former Washington State coach Nick Rolovich will pursue legal action against the university for illegal termination, in part because of “discriminatory and vindictive behavior” by athletic director Pat Chun, his attorney said Wednesday.

Washington State fired Rolovich and four assistant coaches Monday after they failed to comply with Gov. Jay Inslee’s mandate that required all state employees to be vaccinated against COVID-19. Rolovich was the state’s highest-paid employee at $3.2 million per year.

Rolovich, 42, had filed a request for a religious exemption to the mandate that all employees in the state become vaccinated by Oct. 19, but his request — reviewed anonymously — was denied.

Chun on Monday said Rolovich’s firing is for cause separation, meaning the university does not plan to pay him. 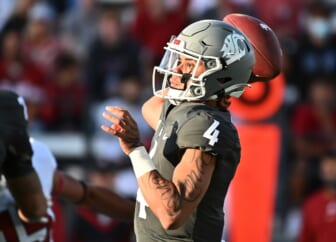 “It is a tragic and damning commentary on our culture and more specifically on Chun that Coach Rolovich has been derided, demonized and ultimately fired from his job merely for being devout in his Catholic faith,” Brian Fahling, who represents Rolovich, said in a statement obtained by ESPN and Yahoo.

“… Since at least early April, it became clear that Chun had already determined that Coach Rolovich would be fired,” the statement read. “Chun’s animus toward Coach Rolovich’s sincerely held religious beliefs, and Chun’s dishonesty at the expense of Coach Rolovich during the past year is damning and will be thoroughly detailed in litigation. Chun’s discriminatory and vindicative (sic) behavior has caused immeasurable harm to Coach Rolovich and his family.”

It is uncertain what restitution Rolovich would be seeking against Washington State. Yahoo Sports reported Rolovich had three years and approximately $9 million left on his contract.