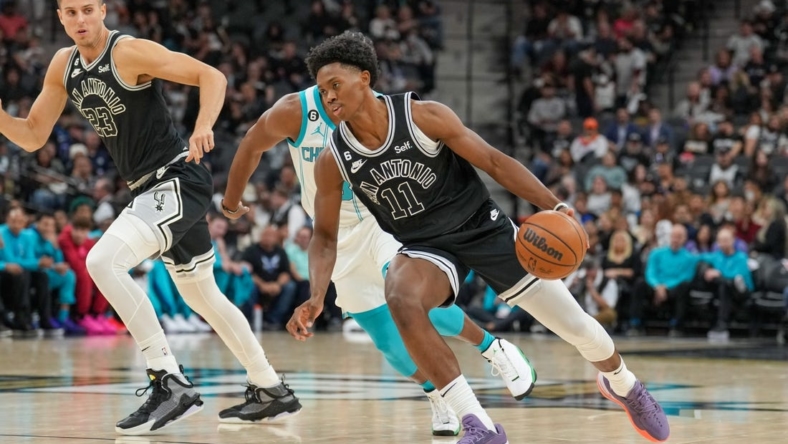 A former clinical psychologist who worked for the San Antonio Spurs said the team failed to act when she reported multiple instances of indecent exposure by Joshua Primo, a 2021 first-round draft pick released by the team last week, according to a lawsuit filed Thursday.

The lawsuit, filed in Bexar County, Texas, contends Primo exposed himself to Dr. Hillary Cauthen on nine occasions. Cauthen’s suit said she informed the team in January about the first incident, which she said occurred in December 2021.

“Rather than act on Dr. Cauthen’s reports, the Spurs ignored her complaints, hoping the organization could ignore and then cover up Primo’s actions,” per the lawsuit. “The Spurs organization was willing to sacrifice Dr. Cauthen to keep what they hoped would one day be a star player.”

The suit continued: “The Spurs’ conduct sends a strong message that they, like other major sports organizations, are willing to tolerate abhorrent conduct on the part of athletes and sacrifice loyal employees, so long as the athlete is successful on the court.”

Cauthen’s attorney is Tony Buzbee, who represented the approximately two dozen women who filed civil suits against Cleveland Browns quarterback Deshaun Watson, accusing him of civil misconduct in message sessions. Watson settled the cases out of court with most of the women.

Buzbee said the team released Primo, 19, after he allegedly exposed himself to a woman in Minnesota last week. Buzbee said Primo also was accused of indecent exposure in July when he visited Las Vegas for the summer league.

The Spurs selected Primo with the No. 12 pick in last year’s draft and released him Friday. They previously picked up his option for a third year with a guaranteed $4.3 million salary in 2023-24.

“It is our hope that, in the long run, this decision will serve the best interest of both the organization and Joshua,” Spurs chief executive officer RC Buford said after releasing Primo.

“Josh Primo is a 19-year-old NBA player who has suffered a lifetime of trauma and challenges,” Briggs said. “He is now being victimized by his former team appointed sports psychologist, who is playing to ugly stereotypes and racially charged fears for her own financial benefit.”

Briggs called Cauthen’s allegations “an act of betrayal against her young client.”

“Dr. Cauthen’s allegations are either a complete fabrication, a gross embellishment or utter fantasy,” Briggs said. “Josh Primo never intentionally exposed himself to her or anyone else and was not even aware that his private parts were visible outside of his workout shorts.”

Primo issued a statement to ESPN on Friday, expressing that he was struggling with his mental health.

“I’ve been seeking help to deal with previous trauma I suffered and will now take this time to focus on my mental health treatment more fully,” Primo said. “I hope to be able to discuss these issues in the future so I can help others who have suffered in a similar way. I appreciate privacy at this time.”

Primo cleared waivers earlier this week and is a free agent.

Primo played in four games this season and averaged 7.0 points, 4.5 assists and 3.3 rebounds. Before being waived, he was on the team’s injury report, listed as having left glute soreness.