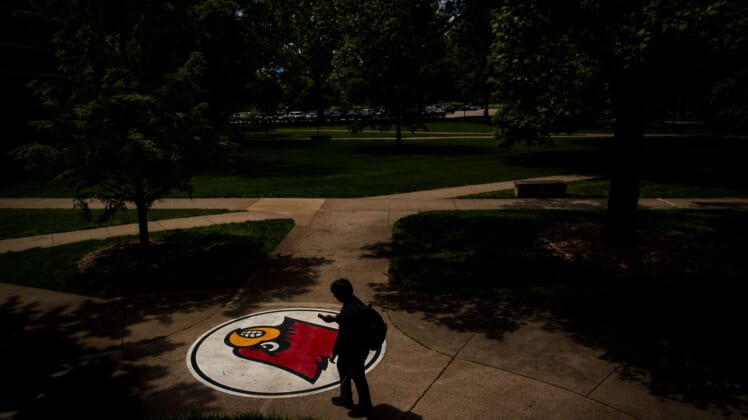 A student looks at his phone as he walks past a cardinal logo Tuesday on the University of Louisville campus. May 14, 2019T9i1125 Uofl Campus

Dino Gaudio, a former Louisville assistant coach, was charged by federal authorities with one count of interstate communication with intent to extort after alleging seeking “a significant sum of money” from the university after the school dismissed him in March.

Per court papers released Tuesday by Michael Bennett, acting U.S. Attorney for the Western District of Kentucky, Gaudio met with school officials on March 17 — after he was let go by head coach Chris Mack — and threatened to leak an array of alleged NCAA recruiting violations unless he was paid his prior salary for 17 months or given one lump-sum payment.

According to the documents, Gaudio warned he would “report to the media allegations that the University of Louisville men’s basketball program had violated (NCAA) rules in its production of recruiting videos for prospective student-athletes and its use of graduate assistants in practice.”

Per the charge, the former assistant then texted one of the recruiting videos to several university members, with the message crossing state lines to Kentucky.

Gaudio, 64, had been removed from the coaching staff, along with fellow assistant Luke Murray, following three seasons after the Cardinals finished 13-7 in 2020-21 and did not qualify for the NCAA Tournament.

“As detailed in the charging document, after Gaudio was informed that his contract would not be renewed, he threatened to inform members of the media of alleged NCAA violations within the men’s basketball program unless he was paid a significant sum of money,” said the university via statement. “The allegations of violations are the impermissible production of recruiting videos for prospective student-athletes and the impermissible use of graduate managers in practices and workouts. While the University cannot comment further due to the ongoing federal investigation and the NCAA process, it continues to cooperate with authorities as well as with the NCAA on the matter.” 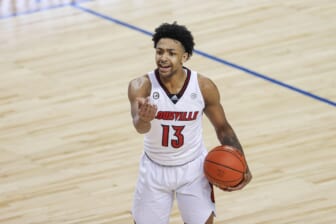 Mack said in a statement, “The university and I were the victims of coach Gaudio’s conduct and I will continue to fully cooperate with authorities in their investigations. We take seriously any allegation of NCAA violations within our basketball program.”

Gaudio could be sentenced up to two years in federal prison if convicted, though he would be eligible for probation.

“When he was not renewed, he was hurt, he became angry, and in the course of that he made statements he regrets,” Gaudio’s attorney, Brian Butler, told ESPN. “Unfortunately, those statements were taped, and he was not given an opportunity to walk them back. They were turned over to law enforcement.

“Coach Gaudio takes full responsibility for his actions and lack of judgment and the statements he made in a very heated situation. He apologizes to his family and friends for his actions and hopes that everyone will consider his 40 years of good and all the contributions he has made.”

Gaudio, who spent seven years as an ESPN analyst prior to joining Mack at Louisville in 2018, has spent 34 years in college coaching. That experience includes head-coaching stints at three schools — Army, Loyola (Md.) and Wake Forest — where he produced a combined 129-155 record in 10 seasons.