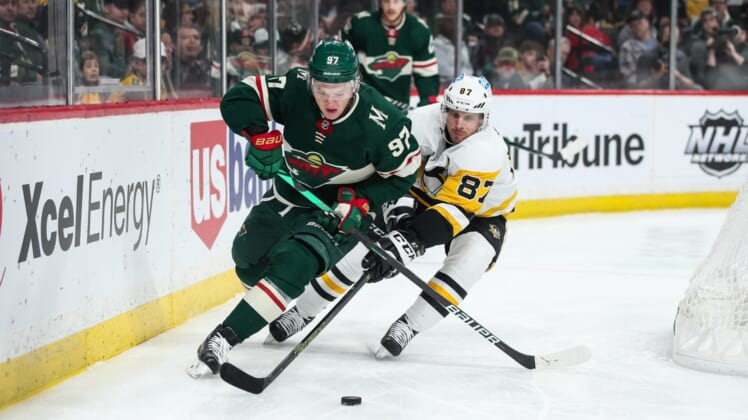 Evgeni Malkin scored the winning goal and Rickard Rakell tallied twice to lead the visiting Pittsburgh Penguins to a 4-3 overtime victory over the Minnesota Wild in St. Paul, Minn., on Thursday.

Jake Guentzel also scored and goaltender Casey DeSmith made 28 saves for the Penguins, who blew a two-goal lead.

Matt Dumba, Frederick Gaudreau and Krill Kaprizov replied for the Wild, who saw their seven-game winning streak snapped and lost a game decided in overtime for the first time this season (7-1). Goalie Cam Talbot stopped 33 shots.

Malkin had the presence to bury his own rebound chance 3:55 into overtime for his 17th of the season. Malkin tied Jaromir Jagr for the most winning goals in Penguins history (78).

Rakell opened the scoring on the game’s first shot, 66 seconds into the affair, when he deflected John Marino’s point shot through the goaltender’s legs.

Dumba notched the first Wild power-play goal by a defenseman midway through the opening period to tie the score. During a scramble, he managed to push the puck just over the line for his seventh goal of the season.

Guentzel put the Penguins ahead again when he buried a rebound for a power-play marker 1:54 into the second period. Kris Letang became just the sixth active defenseman and 33rd in league history to collect 500 assists on the goal.

Then, at 9:49 of the frame, Rakell buried a cross-ice pass from Sidney Crosby during a two-on-one rush. That made it a 3-1 game.

But the Wild cued a comeback. Gaudreau took advantage of an offensive-zone turnover with a shot from the slot to make it a one-goal game. It was his 10th goal of the season.

Kaprizov netted his 14th goal of the month and 38th of the season, 62 seconds into the third period, to tie the affair. The goal is also Kaprizov’s 83rd point of the season, which ties a franchise record.

There was bad news for the Penguins. Jason Zucker, in his first game back after missing 30 due to sports hernia surgery, was cross-checked into the boards by Kevin Fiala midway through the game. Zucker left favoring his right leg.