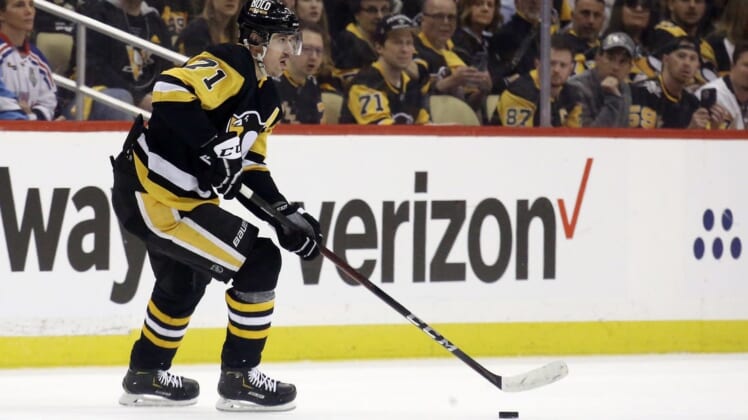 Forward Evgeni Malkin eschewed free agency as he agreed on a four-year, $24.4 million extension with the Pittsburgh Penguins on Tuesday night.

The deal, announced by general manager Ron Hextall, runs through the 2025-26 season.

Multiple reports Monday had indicated that Malkin would not re-sign with the Penguins before free agency begins Wednesday. However, Malkin, 35, will remain in the city where he has spent his entire 16-year career.

“Evgeni is a generational talent who will be remembered as one of the greatest players in NHL history,” Hextall said in a statement. “His hockey resume and individual accomplishments speak volumes about him as a player, and we are thrilled to watch him continue his remarkable legacy in Pittsburgh.”

The No. 2 overall pick in the 2004 NHL Draft, Malkin has won three Stanley Cups with the Penguins and is a four-time All-Star. He won the Hart Memorial Trophy as the league’s most valuable player in 2011-12, as well as the 2009 Conn Smythe Trophy (Stanley Cup playoffs MVP).

Malkin missed much of the past two seasons due to a right knee injury that required offseason surgery. In 41 games in 2021-22, he averaged just more than a point per game (20 goals, 22 assists).