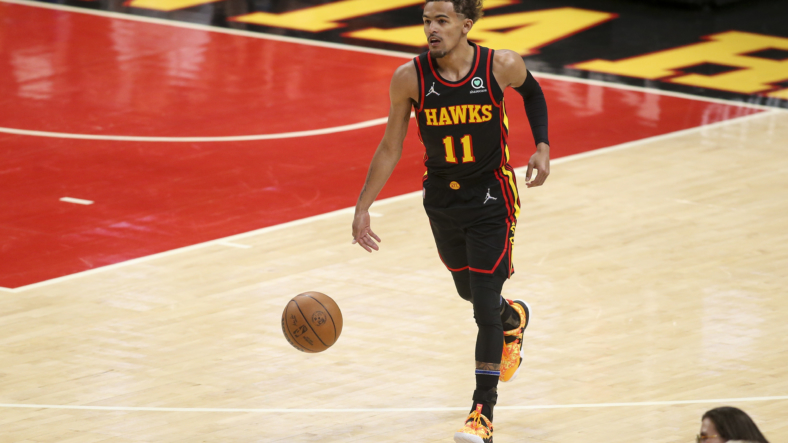 The Atlanta Hawks have been viewed as one of the better teams in the Eastern Conference over the last couple of seasons. Trae Young has led this team to a huge turnaround as they went from the 14th seed in the East in 2019, to the fifth seed in 2020. This turnaround hasn’t been due to Young alone, he has had help from players like John Collins and Clint Capela.

Last season, the Hawks failed to meet the high expectations that were set after the 2020-21 playoffs. As the fifth seed in the East, the Hawks were able to make it to the Eastern Conference Finals. Due to their postseason success, the Hawks were viewed as a top-four team in the East. Finishing as the eighth seed last year, they let a lot of Hawks fans down.

This year they will have higher expectations as they brought in Dejounte Murray over the offseason to pair along with Young in the backcourt. A starting lineup consisting of Young, Murray, De’Andre Hunter, John Collins, and Clint Capela is one of the most balanced starting fives in the league. Some people, however, are still skeptical of just how well they’ll do this year. With that being said, let’s take a look at their floor, ceiling, and the most realistic outcome of their season.

A lot of the skepticism going into this season is about how well Murray and Young will play together. Both of these players share similar play styles, particularly in their playmaking. This could prove to be an issue as they are undisputedly the best two players on the team. If the experiment were to fail, the Atlanta Hawks would have a lot of rethinking to do. However, they should, at the very least, play fairly well together. These are two All-Stars in the same backcourt, meaning that it is extremely unlikely that they’ll be the cause of failure.

The biggest problem for the Hawks this season will be the depth of the Eastern Conference. Newly-acquired Donovan Mitchell made the Cavaliers a sure playoff team.

They were added to the list already consisting of the Milwaukee Bucks, Boston Celtics, Miami Heat, and Philadelphia 76ers. The Nets could also be added to this list, but after last season they are somewhat of a question mark. The Hawks will be among the teams fighting for the last couple of playoff spots, likely finishing in the play-in. With this being the case, the worst possible scenario for the Hawks would be finishing as the 10th seed and missing the playoffs.

As previously mentioned, the Hawks will be among the teams fighting for the last playoff spots in the Eastern Conference. These teams include the Toronto Raptors, Chicago Bulls, and even the Cavaliers. The Raptors finished the end of the 2021-22 season very well, causing many people to believe that they would make a deep playoff push. Unfortunately for the Raptors, this wasn’t the case. The Bulls, on the other hand, did not end the season on a high note. They went from a team that was viewed as a contender to being viewed as a pretender very quickly.

With the Bulls and Raptors being their main competition for a playoff spot, it shouldn’t be too difficult for them to get in. If the Murray/Young duo mesh well and live up to the hype, they could even make it as far as a top-five or six team in the Eastern Conference.

Both Young and Murray have proved that they can score the ball while also spreading it around. If they can both manage to do this at the same time, the Hawks could be a very scary team this year.

With their ceiling being the five seed in the East and their floor being the 10th seed, there’s a pretty wide margin of possibilities. More than anything, this season will be highly impacted by injuries. However, putting injuries aside, there are a lot of unknowns going into the season.

“How will Murray and Young play together?”, “How much will Mitchell improve the Cavs?”, “Will the Bulls see the same success as they did in the regular season last year?”. These are all questions that will only be answered as time goes on.