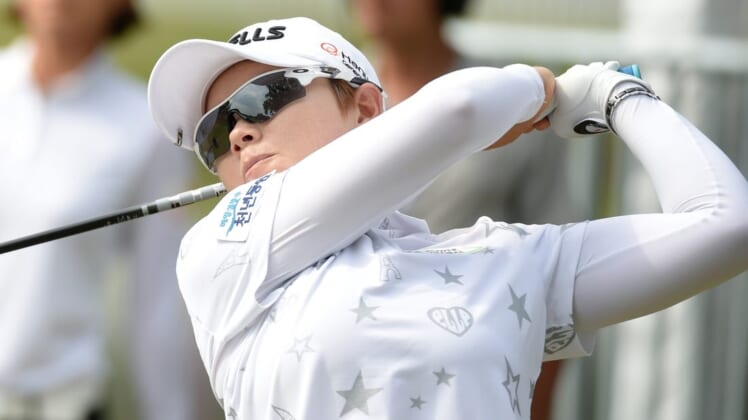 Ji’s victory at Shadow Creek Golf Course allowed her to clinch the final berth into next week’s U.S. Women’s Open.

Both the semifinals and finals were played Sunday. Ji beat Andrea Lee 4 and 3 while Furue edged Lilia Vu 2 and 1 in the semifinals. Vu then defeated Lee 3 and 2 in the third-place match.

Ji won the third hole to go 1-up on Furue but bogeyed two par-5 holes, the fourth and seventh, to fall behind. That’s when she shifted into gear and won three straight holes and four of the next five.

The highlight came at the par-5 ninth hole, when Ji holed out for eagle. Ji was 2-up with three holes to play when she parred the par-5 16th hole and Furue bogeyed.

It was a similar story for Ji in the semifinal match. Lee went 1-up early in the match before Ji got going, making some tough pars to win a few holes and regain the lead. She then won three straight holes at Nos. 13-15, staying steady while Lee made double bogey, double bogey and bogey.

Ji, 36, finished the week 6-0-1 across seven matches. It marked her sixth career LPGA Tour victory and allowed her to return to the U.S. Women’s Open, which she won in 2009.

Furue won three straight holes, Nos. 3-5, early in her semifinal match to build a 2-up advantage on Vu and held on from there.

The 64-player field was divided into 16 groups of four in a round-robin group stage that ended Friday. The group winners advanced to a 16-player, single-elimination bracket.