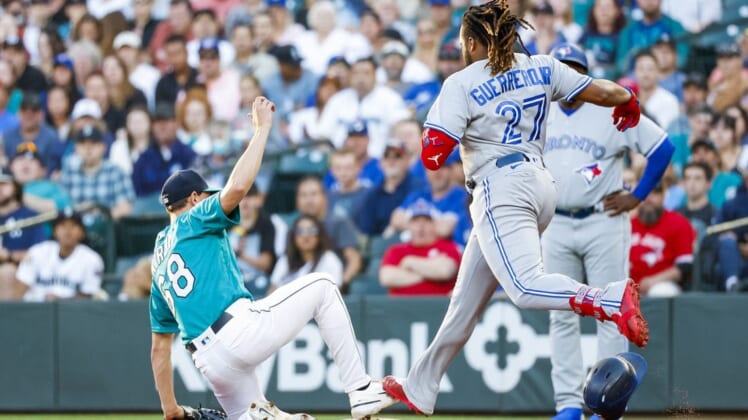 Eugenio Suarez hit a towering three-run homer in the 11th inning to give the Seattle Mariners a 5-2 victory against the visiting Toronto Blue Jays on Friday night.

Left-hander Ryan Borucki (1-0) pitched two scoreless innings against his former team to earn the victory, the Mariners’ season-high sixth in a row.

With a runner at second to start the bottom of the 11th, the Blue Jays intentionally walked Carlos Santana. Suarez hit a 2-1 pitch from Sergio Romo (0-1), released last month by the Mariners, just fair down the left field line.

Toronto lost for the seventh time in its past eight games.

The Blue Jays opened the scoring in the second inning. Teoscar Hernandez led off by lining a single to right field. He stole second and scored on Lourdes Gurriel Jr.’s single to center.

The Mariners tied the score in the bottom of the inning. Suarez and Adam Frazier lined one-out singles to left before Dylan Moore hit a run-scoring double, also to left.

Seattle took the lead in the third as Julio Rodriguez grounded a leadoff single to center and scored on J.P. Crawford’s one-out double into the right field corner.

The Blue Jays tied it at 2-2 in the fifth after Vladimir Guerrero Jr. led off with a double to right. Guerrero took third on Alejandro Kirk’s groundout to the right side of the infield and scored on Hernandez’s single to center.

Rodriguez was involved in two plays sure to make “SportsCenter” (or “SportsCentre,” for Canadian fans).

In the first, he attempted to stretch a double into a triple but lost his footing about 10 feet shy of the base. It appeared he tried to swim the rest of the way and was thrown out.

In the Toronto fourth, the Blue Jays had runners at first and second with no outs when Santiago Espinal lined a one-hopper to Rodriguez in center field. Rodriguez fooled Gurriel, the lead runner, into thinking the catch was going to be made and his throw clocked 99 mph on one bounce to third for a rare 8-5 forceout.

Seattle rookie George Kirby allowed 10 hits in 4 1/3 innings, but only two runs. He walked one and fanned four.