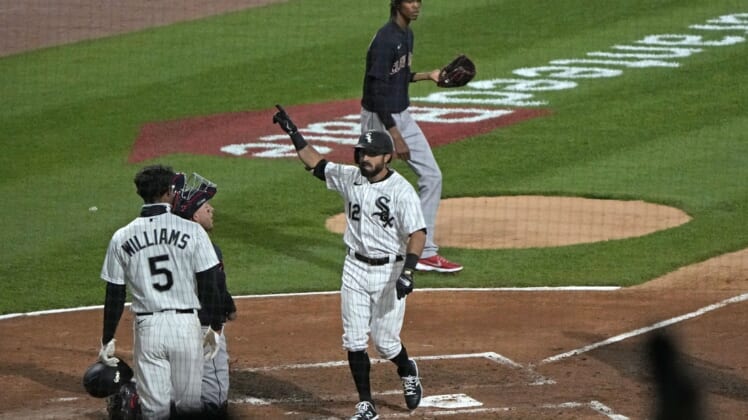 Pinch runner Nick Madrigal scored on a game-ending throwing error by first baseman Yu Chang to boost the host Chicago White Sox to a 4-3 victory against the Cleveland Indians on Monday in the opener of a four-game series.

With one out and runners on first and second, Nick Williams rolled a fielder’s choice grounder to Chang, who elected to try to start a double play. The throw to second base caromed off the helmet of Chicago’s Yasmani Grandal, however, caroming away and allowing Madrigal to score.

Codi Heuer (1-0) was the winner in relief, striking out four in 2 1/3 scoreless innings, both career highs. Heuer allowed one hit while lowering his ERA to 1.35.

Emmanuel Clase (1-1) took the loss, allowing one run (unearned) on one hit with one walk in one-third of an inning.

After hitting Franmil Reyes with a pitch to open the second, Chicago’s Dallas Keuchel allowed a home run to Eddie Rosario as Cleveland grabbed a 2-0 lead.

Keuchel, whose spot in the rotation was moved up by two days to start in place of fellow lefty Carlos Rodon — scratched two hours before game time with an upset stomach — settled in after that. Beginning by inducing Amed Rosario on a groundout to third base following the Eddie Rosario home run, Keuchel retired 12 consecutive Indians batters, including two by strikeout.

Things threatened to unravel in the Cleveland sixth, as the Indians loaded the bases with no outs on two walks and a single to chase Keuchel. Reliever Evan Marshall retired all three batters he faced, but the second out came on a sacrifice fly by Reyes to tie the game at 3.

Chicago appeared primed to answer immediately, but failed to score after loading the bases with no outs in the bottom of the sixth. Cal Quantrill escaped unscathed by striking out Yermin Mercedes and getting Grandal to ground into a double play.

White Sox right fielder Adam Eaton blasted a three-run home run in the third inning for a 3-2 lead. Eaton, who homered for the second straight game, has reached base in each game in which he has appeared this season.