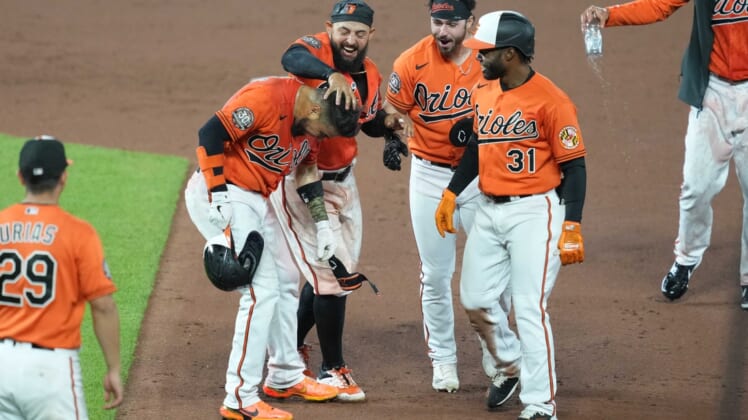 Jorge Mateo scored the tiebreaking run on a throwing error by reliever Hirokazu Sawamura after a bunt by Robinson Chirinos in the 10th inning as the Baltimore Orioles outlasted the visiting Boston Red Sox 2-1 on Saturday night.

The Orioles sent Mateo to pinch run for Ramon Urias as the automatic runner at second, and with one out, the Red Sox intentionally walked pinch hitter Ryan McKenna to set up a potential double play.

Chirinos showed bunt on the first three pitches he saw from Sawamura (0-1) before getting a bunt down. It went slightly up in the air on the third base side of the mound.

Sawamura was slow to field the ball and rushed his throw to third, causing the ball to sail well over Rafael Devers’ head and down the third base line. Mateo scored easily to give Baltimore its second walk-off win of the season. The Orioles also halted a five-game losing streak.

Down 1-0, the Orioles tied the game in the eighth inning on a two-out single by Anthony Santander off Matt Barnes. Cedric Mullins’ second double of the game set up Santander’s two-strike hit.

Mullins’ other double broke up a no-hit by Nathan Eovaldi with two outs in the sixth.

After Baltimore starter Spenser Watkins allowed one run on five hits in 4 2/3 innings, six relievers followed. Jorge Lopez (2-1) breezed through a perfect ninth and stranded two in the 10th by retiring Alex Verdugo on a ground ball.

Before the Orioles scratched out two late runs, they were overpowered by Eovaldi, who retired 14 in a row until Mullins doubled down the left field line.

Eovaldi allowed three hits in seven scoreless innings. He recorded a season-high eight strikeouts (seven swinging) and did not walk a batter for the second straight outing.

An RBI single by Xander Bogaerts three batters into the game accounted for Boston’s run. The Red Sox stranded 10 and were handed their fourth walk-off loss in extra innings this season.