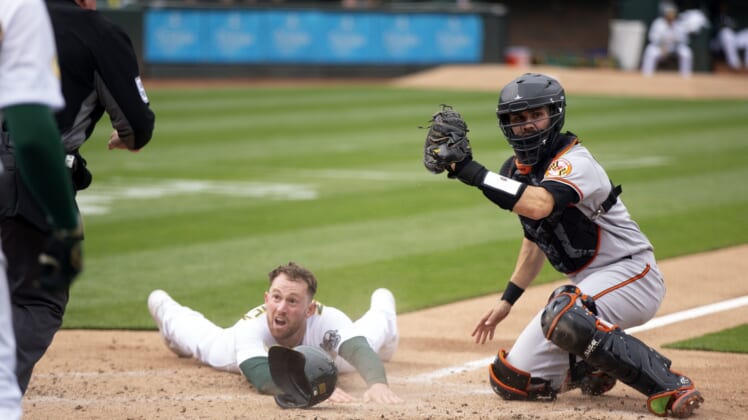 Jorge Lopez worked out of an eighth-inning jam as the last of five pitchers who combined for a seven-hit shutout Wednesday afternoon as the visiting Baltimore Orioles held on for a 1-0 victory over the Oakland Athletics.

The only run in the pitchers’ duel, that began as a matchup of right-handers Jordan Lyles (1-1) and Daulton Jefferies (1-2), was unearned in the fifth-inning after a throwing error by Oakland shortstop Elvis Andrus.

With the start time moved up three hours to beat an expected evening downpour, Lyles worked the first five innings, weaving in and out of trouble thanks to six strikeouts.

Lyles allowed five hits with a walk and he a hit batter, with Oakland getting two baserunners in the second, fourth and fifth innings.

The A’s nearly got to Lyles for a run in the second, when Seth Brown followed a Billy McKinney single with a double. But McKinney was thrown out at the plate by right fielder Ryan McKenna.

Paul Fry and Dillon Tate each worked a perfect inning before the Orioles’ fourth pitcher, Bryan Baker, served up back-to-back singles to Tony Kemp and Sheldon Neuse to start the eighth.

After Baker struck out Sean Murphy, Lopez was summoned from the bullpen and stranded two runners in scoring position by striking out Christian Lopes and getting Brown to ground out to first base.

Lopez added a perfect ninth inning, with two more strikeouts, for his second save.

Jefferies matched Lyles until allowing a leadoff double by McKenna in the fifth. Andrus’ error occurred on the next play, a grounder by Kelvin Gutierrez, allowing McKenna to dash home from first.

Jefferies went six innings, allowing just the unearned run and three hits. He struck out five without a walk.

Anthony Santander collected a double and a single for the Orioles. It was the third straight game between the teams in which the winning team had fewer hits than the loser.

Kemp and Neuse had two hits apiece for the A’s, who won the first two games of the series 5-1 and 2-1.