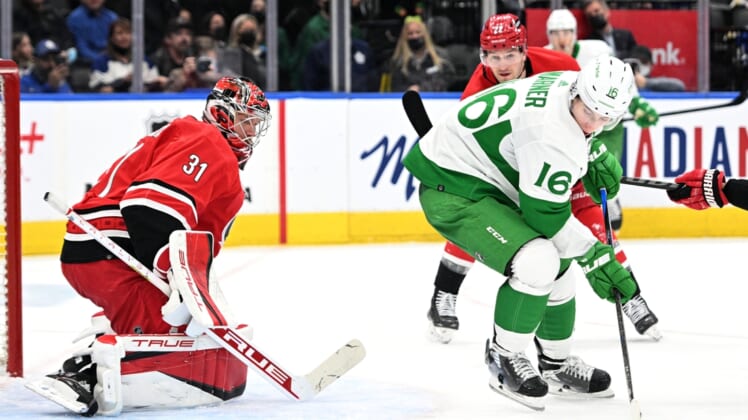 Kallgren earned a shu=tout against the Dallas Stars in his first NHL start on Tuesday. He made his debut with 30 minutes of relief on March 10 in an overtime loss to the Arizona Coyotes.

Ilya Mikheyev, Mitchell Marner and Ondrej Kase scored for the Maple Leafs, who have won two in a row.

Ethan Bear and Vincent Trocheck scored for the Hurricanes, who have lost two straight.

Carolina dominated through most of the first period, but Toronto scored the only goal. Mikheyev took a pass from Justin Holl and scored his 12th goal of the season at 15:49 with a backhand shot. Andersen was caught anticipating a pass into the slot.

The Hurricanes had both power plays in the first period and had a 14-6 advantage in shots on goal.

Kallgren made a superb save on Brady Skjei to open the second period. He also foiled Skjei early in the first period.

Marner snapped a shot from the right circle for his 24th goal of the season at 4:39 of the second period.

Jordan Staal, who was in the low slot, had Kallgren beaten but his shot clanked off the post at 8:10 of the second.

Carolina led 23-12 in shots on goal after two periods.

Bear scored his fourth goal of the season at 4:09 of the third period on a rebound after Jesper Fast’s shot was blocked.

Trocheck scored his 16th goal at 19:57 of the third with Andersen out for an extra attacker.

Auston Matthews did not play as he completed a two-game suspension for a cross-checking incident against the Buffalo Sabres on Sunday.