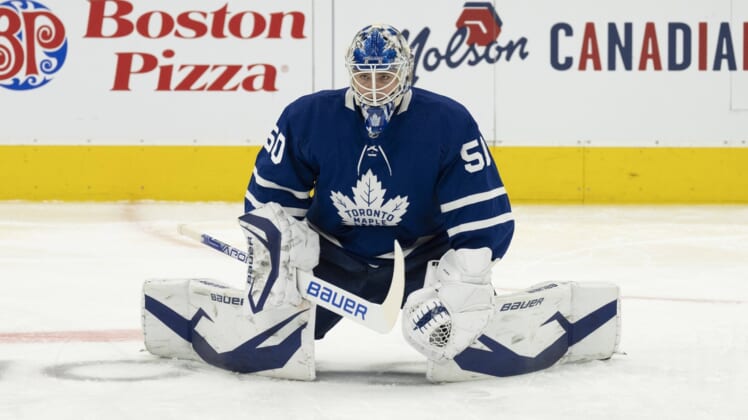 The Toronto Maple Leafs look to put aside their defensive woes for a second straight night on Thursday when they host the Carolina Hurricanes.

Goaltender Erik Kallgren made 35 saves to earn a shutout in his first career NHL start during the Maple Leafs’ 4-0 victory over the Dallas Stars on Tuesday.

The 25-year-old made his NHL debut last Thursday in relief of Petr Mrazek during a 5-4 overtime loss to the Arizona Coyotes.

“He was great (on Tuesday), he just continued where he left off in terms of not trying to do too much in the net,” said Maple Leafs coach Sheldon Keefe, who picked up his 100th win. “He was solid, pucks came to him and for the most part stuck to him. I thought our team played really well in front of him.”

Mrazek struggled again Sunday in a 5-2 loss to the Buffalo Sabres. No. 1 goaltender Jack Campbell, who has had recent difficulties, is out with a rib injury.

“Before the game I was just trying to treat it as a regular game.” Kallgren said. “Just tried to do my daily routines and during the game just tried to not think too much.”

Auston Matthews, who leads the NHL with 45 goals, will not play Thursday. He will complete a two-game suspension, the result of a cross-checking incident in the contest against Buffalo.

The teams have split two games this season. The Hurricanes posted a 4-1 win on Oct. 25 at Raleigh, N.C, while the Maple Leafs skated to a 4-3 overtime victory on Feb. 7 at Toronto.

Former Maple Leafs goaltender Frederik Andersen has been solid for the Hurricanes.

Andersen recorded his 30th win of the season on Saturday after making 28 saves in the 3-1 home victory over the Philadelphia Flyers. He had missed the previous two games with an upper-body injury.

Antti Raanta turned aside 18 shots in Carolina’s 4-2 loss to the Pittsburgh Penguins on Sunday.

Carolina outshot Pittsburgh 20-4 in the third period on Sunday and 43-22 for the game.

“We kind of had to chase the game,” Hurricanes coach Rod Brind’Amour said. “I don’t want to say that they sat on the lead, but they didn’t have to do anything because they were ahead. It was a good effort. I’m not disappointed at all with the way we played.”

“I think it was just the way that the game played out,” said Hurricanes defenseman Brett Pesce, who scored a goal while taking seven shots on goal. “I honestly thought we played a good game.”

Fellow defenseman Tony DeAngelo, who has missed nine games with an upper-body injury, took part in practice Wednesday. He possibly could return to play as soon as Thursday.