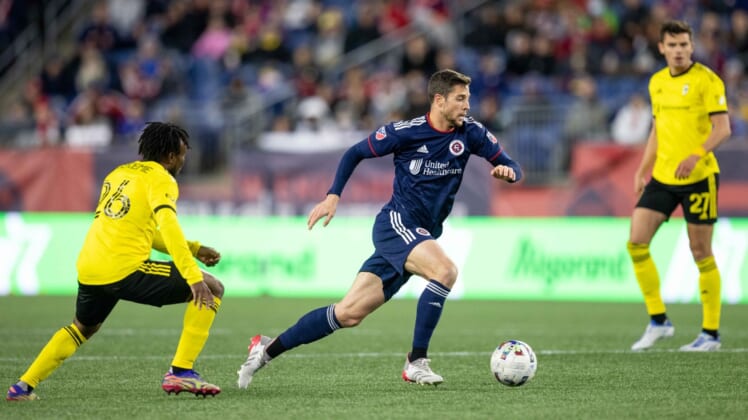 Erik Hurtado came off the bench to score the tying goal in the 89th minute when the Columbus Crew rallied to tie the New England Revolution 2-2 in Foxborough, Mass., on Saturday.

The Revolution (3-5-2, 11 points) thought it had the victory secured when Adam Buksa put the Revolution ahead 2-1 in the 82nd minute but Hurtado, who entered in the 84th minute, converted a cross by Derrick Etienne Jr., who assisted both goals for the Crew (3-3-4, 13 points).

New England’s Tommy McNamara put a shot off the crossbar in the 94th minute as the Revolution failed to win consecutive games for a sixth consecutive time (0-4-2) since September.

Miguel Berry gave Columbus the lead in the 27th minute before DeJuan Jones tied it in the 70th.

Berry scored his first goals since the season opener vs. Vancouver on Feb. 26.

Pedro Santos from his left back position led the transition into the final third and found Etienne on the left wing. Berry made a run to the middle of the box to get inside Andrew Farrell to slot the pass from Etienne.

Etienne, a midfielder who is second on the team with three goals, moved to right back when Marlon Hairston was scratched from the starting lineup with an undisclosed injury.

Until the Berry goal, the best scoring chance for either team was Darlington Nagbe getting behind the defense off a setup by Yaw Yeboah only to have Matt Turner make his only save of the match.

Turner, who is headed to England’s Arsenal this summer, made his second appearance of the season after recovering from a foot injury.

Jones got the equalizer thanks to a cross to the far post from the right channel by Emmanuel Boateng. It was the first goal allowed by the Crew after back-to-back shutouts for Eloy Room, who did not have a save.

The Crew plays at New York City on May 14. The Revolution are away against Atlanta United on May 15.