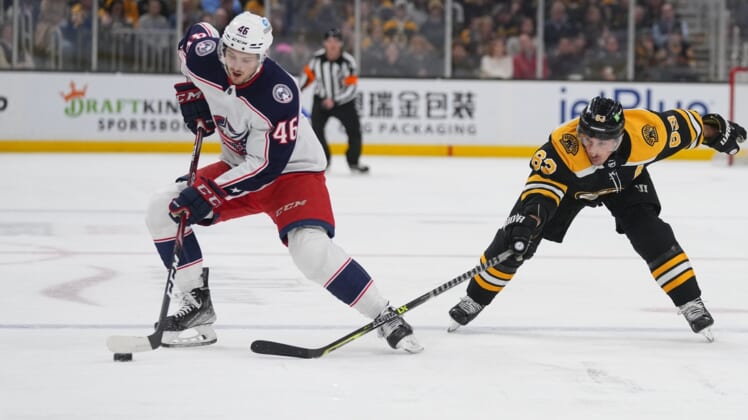 Erik Haula’s second goal of the game – a power-play tally with 3:54 left in the third period – lifted the Boston Bruins to a 5-2 win over the visiting Columbus Blue Jackets on Saturday night.

Haula decided the sixth win in seven games for Boston (43-20-5, 91 points) by tipping home Brandon Carlo’s shot from the top of the left circle. It was his second multi-goal game of the season.

Brad Marchand had a game-tying goal and two assists, DeBrusk had a goal and an assist, and Patrice Bergeron and Charlie McAvoy added two assists for the Bruins.

Columbus goalie Elvis Merzlikins made 37 saves. Boston held a 42-24 shots on goal advantage, including 15-4 in the third period.

Just after Merzlikins robbed David Pastrnak with a pad save on the doorstep, Haula finished off a net-mouth scramble for the game’s first goal at 15:09 of the first period.

Despite being outshot 15-5 in the opening frame, Columbus knotted the score with 27.3 seconds left as Nyquist buried a loose puck that popped out of Swayman’s glove after an initial save on Cole Sillinger.

Danforth scored the second Blue Jacket goal in a span of 1:10 just 42 seconds into the middle frame, picking up the rebound of a Yegor Chinakhov shot that hit the outside of the net.

At the 18:13 mark of the second period, Marchand banged in the tying goal at the end of a tic-tac-toe passing sequence with Bergeron and DeBrusk.

The Bruins and Blue Jackets finish a home-and-home series Monday night in Columbus.