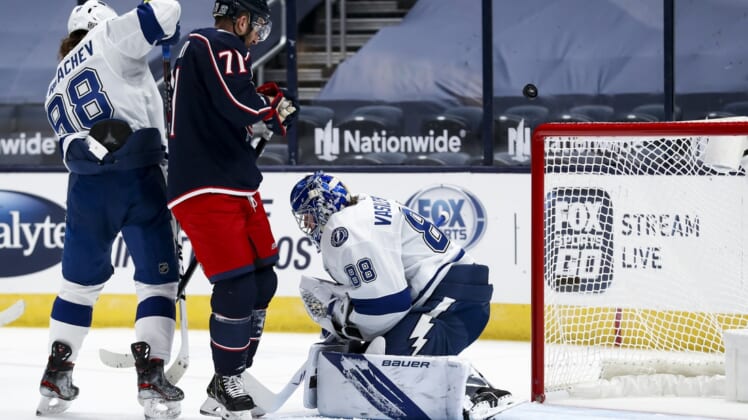 Eric Robinson scored and set up a goal and Elvis Merzlikins made 30 saves to help the host Columbus Blue Jackets post a 5-2 win over the Tampa Bay Lightning on Saturday afternoon.

Fourteen players produced at least a point for the Blue Jackets, who improved to 10-3-3 in their last 16 matinee games dating back to November 2016.

Prior to the afternoon start, Columbus announced a blockbuster trade involving disgruntled star Pierre-Luc Dubois, who was benched for the last two periods plus overtime Thursday in the team’s 3-2 overtime loss against Tampa Bay.

Dubois was sent to the Winnipeg Jets in exchange for right winger Patrik Laine and Columbus native Jack Roslovic on Saturday. The Jets also will receive a 2022 third-round draft pick.

Laine was the second overall selection of the 2016 NHL Draft, while Dubois was taken with the following pick.

Trailing through the slot, Hedman had first shot attempt broken up, however the defenseman flipped the puck through his legs for a goal at 4:10. But Foligno scored on a rebound — his second in as many games and third overall — at 4:27.

After a drop-pass by Grigorenko, Vasilevskiy appeared to stop Kevin Stenlund’s blast from the right circle. The puck trickled behind him, however, and Grigorenko swooped in for his first goal with Columbus at 10:03.

Gavrikov wristed in his first for a 3-1 lead with 59 seconds left in the period, but Palat tallied on a tap-in from the far post at 19:46 on the game’s first power play.

Werenski gave Columbus a 4-2 cushion at 6:34 of the third, and Robinson added an empty-netter to beat Tampa Bay — which lost defenseman Erik Cernak and forward Mitchell Stephens to injuries – for the first time in nine regular-season games.