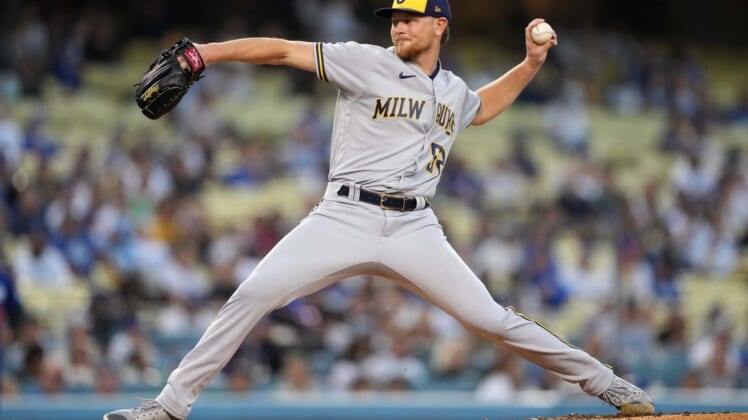 Luis Urias and Keston Hiura hit home runs, while the Milwaukee Brewers’ pitching staff shut down the Los Angeles Dodgers in a 4-0 road victory Monday to open a three-game series.

Brewers starter Eric Lauer delivered five scoreless innings in yet another strong performance against the Dodgers, giving Milwaukee three victories in five games over Los Angeles in the past eight days. Christian Yelich also drove in a run for the Brewers.

Luis Urias’ home run was one of just two hits against Dodgers left-hander Julio Urias, who entered with a 0.95 ERA over his last six starts. Julio Urias (13-7) had earned a win in six consecutive starts, but that streak came to an end.

The Dodgers also saw their nine-game home winning streak come to an end.

The Brewers did not have a hit through 3 2/3 innings when Luis Urias hit a home run to left-center on a 3-2 fastball from Julio Urias. One inning earlier, Luis Urias entered the game when Mike Brosseau departed with ribcage discomfort.

The only other hit the Brewers had against the Dodgers’ left-hander was a two-out single from Yelich in the sixth inning. Julio Urias walked one with seven strikeouts.

The Dodgers managed five hits against Lauer, while the lefty walked two with two strikeouts. Los Angeles almost broke through in the second inning, but Justin Turner was thrown out by Yelich at the plate after a single to left by Gavin Lux.

The Dodgers loaded the bases with two outs in the fourth, but Lux flied out to left to end the threat.

The Brewers added three insurance runs in the ninth inning off former Milwaukee right-hander Phil Bickford on a Yelich RBI single, a sacrifice fly from Luis Urias and Hiura’s 13th home run and third in the past two games.