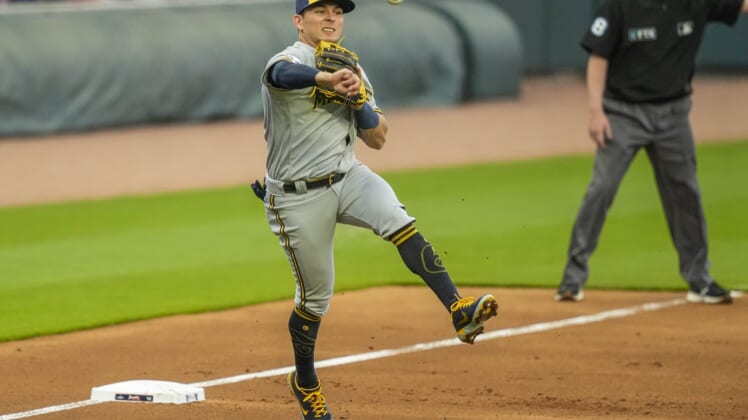 Left-hander Eric Lauer allowed only two hits over 6 1/3 innings to lead the visiting Milwaukee Brewers to a 6-3 win over the Atlanta Braves on Friday.

It was the fourth straight win for Milwaukee, which has won nine of its past 10 games. Atlanta took its fifth loss in seven games.

Lauer (3-0) gave up two runs, one earned, while walking three and striking out eight. Over his past four starts, Lauer has allowed only four runs (three earned) in 25 1/3 innings. He has fanned 37 and walked six in that span.

Lauer left the game with runners on first and second. Brad Boxberger entered and got Travis d’Arnaud to hit into an inning-ending double play.

Josh Hader worked around an error to pitch a scoreless ninth to earn his 11th save of the season. It was his 107th career save, breaking a tie with John Axford for second place on the club’s career list. Hader trails just Dan Plesac (133).

The losing pitcher was Atlanta reliever Collin McHugh (0-1), who allowed two runs in one-third of an inning. He gave up a hit and walk in the sixth inning, when the Brewers scored four runs despite not having a hit leave the infield.

Lorenzo Cain got the first run home on a grounder against Braves reliever Tyler Matzek for a 3-2 lead. Matzek then walked Kolten Wong to load the bases and walked Willy Adames to force in a run.

The final two runs of the frame scored when Christian Yelich greeted Tyler Thornburg with a sharp single to second baseman Ozzie Albies, whose wild throw to second and allowed a second runner to score. That hit and error gave Milwaukee a four-run lead.

The Brewers jumped on top 2-0 in the first against Atlanta opener Jesse Chavez, who worked only one inning. Rowdy Tellez doubled home a pair of runners with two outs. It was Tellez’s 15th extra-base hit and gave him 24 RBIs, both tops on the team.

After their first nine batters went down in order, the Braves tied the game with two runs in the fourth. Ronald Acuna Jr. hit his first homer of the season, a 450-foot shot struck while falling down, and Albies drove home a run with a sacrifice fly.

Braves shortstop Dansby Swanson hit a solo homer, his second long ball of the season, in the eighth against Jandel Gustave.