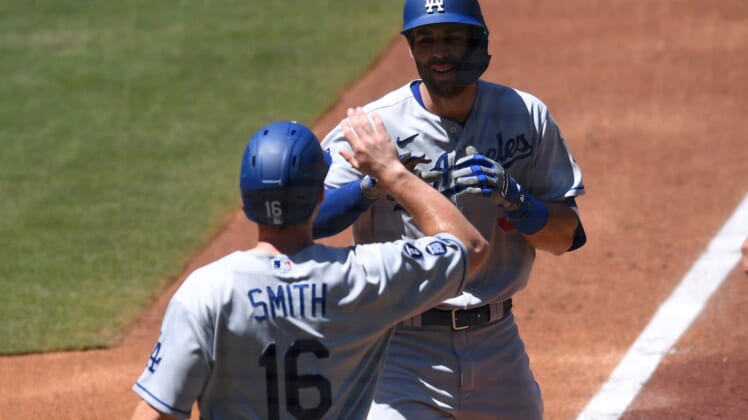 Eric Hosmer broke a tie with a two-out RBI single off Dodgers’ reliever Dennis Santana in the bottom of the eighth Sunday afternoon and slumping Tommy Pham followed with a two-run double as the San Diego Padres defeated visiting Los Angeles 5-2.

Hosmer, who one inning earlier followed Machado’s third single of the game with a RBI double, then grounded a single to center to score Profar with the go-ahead run. Hosmer is hitting .750 (9-for-12) this season with runners in scoring position and two out.

Pham, who was robbed of a game-tying double on Mookie Betts’ sensational, game-ending catch Saturday night, then doubled into the left-field corner to snap a 3-for-36 drought.

Keone Kela (2-0) was credited with the win while Mark Melancon worked a perfect ninth for his sixth save, which is tied for the major league lead.

Cy Young Award-winning starters Trevor Bauer of the Dodgers and Blake Snell of the Padres engaged in a second straight pitching duel between the teams.

The Dodgers took a 2-0 lead in the second against Snell. Will Smith opened the inning with a single and Chris Taylor followed with a home run into the second deck in left center at Petco Park. Those were the only hits allowed by Snell over five innings. He also issued two walks with seven strikeouts.

Bauer departed after seven innings with a 2-1 lead. He allowed three hits and a walk with seven strikeouts — although each of the hits were memorable.

Padres’ second baseman Jake Cronenworth drove a hanging curve deep into the right-field seats leading off the fourth to cut the Dodgers’ lead to 2-1. And the other two hits off Bauer were singles by Machado, who raised his career batting average against Bauer to .632 (12-for-19, four homers).