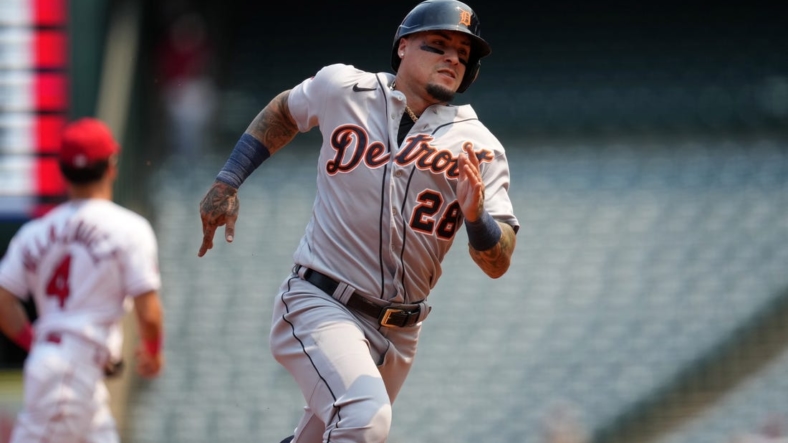 Eric Haase went 5-for-5 with two doubles and a home run to lead the Detroit Tigers over the Los Angeles Angels 5-4 Wednesday afternoon in Anaheim, Calif.

The Angels led 4-3 heading into the top of the ninth, but Kerry Carpenter led off the frame with a home run to tie the game at 4-4. No. 9 hitter Ryan Kreidler, playing in his sixth career major league game, followed with his first career homer to put the Tigers in front.

Both homers came against Angels lefty Jose Quijada (0-4). Tigers reliever Jose Cisnero (1-0) got the victory and Gregory Soto pitched a scoreless ninth that included strikeouts of Shohei Ohtani and Mike Trout for his 25th save.

Detroit, which also got a homer from Spencer Torkelson, now has 84 home runs this season, the fewest in the majors.

Ohtani and Trout each homered for Los Angeles. Angels catcher Matt Thaiss went deep as well for his first homer of the season.

Trout has now homered in four consecutive games and has eight homers in his past 14 games.

Both Angels starter Patrick Sandoval and Tigers starter Drew Hutchinson did not allow a run through three innings before both teams broke through in the fourth.

In the top of the inning, Torkelson led off with a homer on a 2-0 fastball from Sandoval to give Detroit a 1-0 lead. But in the bottom of the frame, the Angels answered with two runs.

Taylor Ward led off with a single and two outs later, Thaiss hit a two-run homer to give the Angels a 2-1 lead.

Hutchison got through the inning but was finished after four, allowing two runs on five hits and two walks. He struck out three.

The Angels increased their lead in the fifth when Trout led off with a homer off Tigers reliever Will Vest.

The Tigers managed to rally, scoring one run in both the sixth and seventh. Haase hit a solo homer off Andrew Wantz in the sixth, and Willi Castro had an RBI single against Jaime Barria in the seventh.

The game didn’t stay tied for long, though, as Ohtani homered leading off the bottom of the seventh.