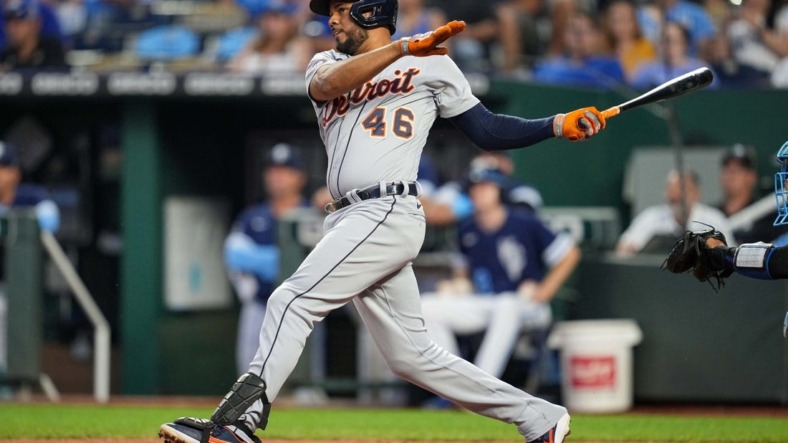 Jeimer Candelario finished a triple short of the cycle for the Tigers (53-85).

Wentz, who grew up a Royals fan in a suburb of Kansas City, made his first appearance for the Tigers since May 31, after leaving after four-plus innings with left shoulder strain. He made a dozen appearances with Triple-A Toledo.

Haase opened the scoring in the second inning with a 444-foot leadoff home run to left field. Spencer Torkelson and Kerry Carpenter followed with singles, and both runners scored when Candelario blasted a 445-foot home run off the wall of the Royals Hall of Fame in left field.

The Tigers came into the game with the fewest home runs (84) in the majors by a significant margin. The Cleveland Guardians have the next fewest with 102.

The Tigers added two additional runs in the fourth on a groundout by Willi Castro and a single by Javier Baez. Baez’s hit ended Lynch’s night.

Candelario hit an opposite-field double down the left-field line in the fifth. Nate Eaton fumbled the ball, allowing Jonathan Schoop to score an unearned run.

Haase hit his second home run of the game with two outs in the sixth, and he dropped an RBI double into right in the eighth. The Tigers added a run in the ninth.

Bobby Witt Jr. and Nate Eaton drove in late runs for the Royals.