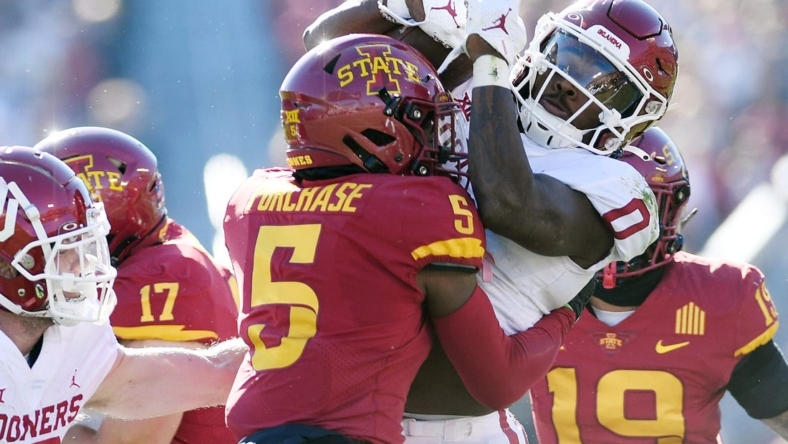 Eric Gray ran for 101 yards and a touchdown to lead Oklahoma to a 27-13 win over Iowa State in Big 12 action on Saturday in Ames, Iowa.

Two plays later, Gray scored from 4 yards out on a direct snap to give Oklahoma some breathing room.

The Sooners (5-3, 2-3 Big 12) have won back-to-back games to move within a win of securing bowl eligibility for the 24th consecutive season.

It was just the Sooners’ third play of the game to gain more than 15 yards. All came from Farooq, who finished with 74 receiving yards and 26 rushing yards.

Gabriel completed 15 of 26 passes for 148 yards and a touchdown.

The Cyclones pulled within seven early in the fourth quarter, scoring their only touchdown on a 15-yard pass from Dekkers to Jaylin Noel to cut Oklahoma’s lead to 20-13.

The Sooners took a 13-6 lead into halftime thanks to some trickery.

Early in the second quarter, Oklahoma lined up for a short field goal after Gray was stopped for a loss and third-and-goal from the 1.

Holder Michael Turk pitched the ball forward to kicker Zach Schmit, who cut to his left and easily found the end zone for the game’s first touchdown to break a 3-3 tie.

Schmit scored all 13 of the Sooners’ first-half points.

Xavier Hutchinson had a team-high 10 catches for 72 yards for the Cyclones.