Eric Gordon has been a big part of four playoff teams during his five seasons with the Houston Rockets. Making the playoffs each year since 2012, the Rockets took a sharp downturn in 2020 after trading James Harden. With the Rockets now embracing a youth movement, could the 32-year-old Eric Gordon be on the move as well?

According to Kelly Iko of The Athletic, the 13-year veteran is open to a trade, with the hopes of landing in a more competitive situation. With the Rockets recently agreeing to work with John Wall on finding a trade out of town, it only makes sense to shop Gordon too.

Gordon, the sixth man of the year in 2017, is under contract for three more seasons.

Factoring in his desire to join a playoff contender and his contract, we examine three potential landing spots for an Eric Gordon trade.

We’ve heard all offseason how the Dallas Mavericks don’t have enough star power next to Luka Doncic. Trading for Eric Gordon wouldn’t necessarily change that, but he would add a veteran presence who can help take the pressure off Doncic in Dallas. Besides, which team couldn’t use another above-average player who can shoot, defend and handle the ball? 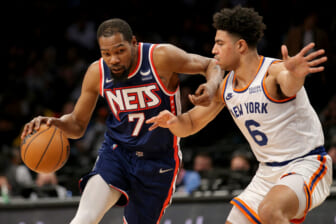 Taking a chance on Gordon’s shaky injury history may be worth the risk for the Mavericks. The presence of Tim Hardaway Jr. would lessen the impact of another injury-riddled season from Gordon. Behind Hardaway, the Mavs have several young pieces, they just aren’t sure how reliable they are yet. Gordon could help show them some vet moves while helping the team win games.

The Denver Nuggets had a great season, led by an MVP performance from Nikola Jokic and another great year from Jamal Murray. Unfortunately, Murray tore his ACL in April and is expected to miss the entire 2021-2022 NBA season. If the Nuggets hope to get back to the playoffs, they’re going to need to find a way to get productive minutes from their guards.

That’s where Eric Gordon comes in. Gordon has been to the playoffs in five of the past seven seasons and has no issues filling a bench role on a potential contender. Not having Murray will hurt the Nuggets a lot, but Gordon may be able to add some more defense and scoring to a backcourt that is suddenly in need.

As the Philadelphia 76ers continue playing hardball with Ben Simmons, we can’t rule out anything ahead of the NBA season. The Sixers could send Simmons elsewhere, creating a ton of cap space in the process. Would GM Daryl Morey then be interested in reuniting with Eric Gordon? It’s certainly possible.

Without a Simmons trade, the roster seems far from set at the moment. No matter what, Philly needs to have a team of shooters surrounding Joel Embiid so as to not clog the paint. Gordon can hit threes, distribute and defend.

You can never have too many veterans capable of getting the job done in crunch time and the Sixers already know what to expect out of Gordon, with Morey being familiar with him from their days in Houston. With Gordon expected to be moved, keep an eye on Philly as a potential trade partner.