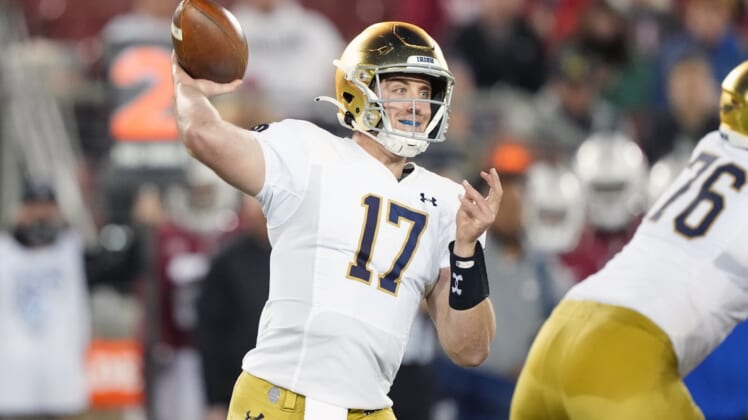 The 51st Fiesta Bowl is a meeting of two teams that have never faced each other in football, No. 5 Notre Dame and No. 9 Oklahoma State on New Year’s Day at State Farm Stadium in Glendale, Ariz.

Notre Dame just missed making the final four of the College Football Playoff, while Oklahoma State fell short by just inches thanks to a touchdown-saving tackle from Baylor that, if not made, would have won the Big-12 Championship Game for the Cowboys and given them a strong case for the playoff.

Instead, the Fiesta Bowl got what is on paper an enticing matchup between two top programs, the Fighting Irish (11-1) and Cowboys (11-2).

“I mean, at this point, you don’t really look back. It’s, what, three weeks? That first week, they gave us a week off to kind of go home and see our family, do finals, stuff like that,” said Cowboys defensive end Brock Martin.

“We are as close as anybody to winning that game. As a defense, we did everything we could. I know the offense wanted to get in there and score that touchdown and win the game just as much as we wanted them to. But we do look back on it. We still talk about it every once in a while. It’s just locker room talk, this and that, at practice, whatever. But at this point, it’s just dust in the wind.”

The Oklahoma State defense yields the third-fewest yards per game among all FBS programs. That’s a challenge for Notre Dame, who could look to throw to tight end Michael Mayer, whose 64 receptions lead the Irish.

But the Cowboys no longer have the architect of that defense, coordinator Jim Knowles, who took the same job at Ohio State earlier this month.
Notre Dame will be without leading rusher Kyren Williams, who opted to sit out in preparation for the NFL Draft.

Another storyline for Notre Dame is that the Fiesta Bowl will be the first game under new head coach Marcus Freeman, after Brian Kelly left to take the LSU head coach position.

Notre Dame’s only loss this season came to Cincinnati, which made the College Football Playoff. The Irish are led at quarterback by Jack Coan, a graduate transfer from Wisconsin who has experience taking a team to a New Year’s Six bowl game, having led the Badgers to the Rose Bowl in 2019 against Oregon.

Coan is the main signal caller, but the Irish could bring in running threats at the position during the game. Coan, who in high school committed to Notre Dame as a lacrosse player, stuck with football and went to Wisconsin before transferring.

“I think, from an intangible standpoint and a personality standpoint, leadership, being the guy in the room, being the guy in front of the offense, that was all more than we anticipated. From a physical standpoint, I said it from the first practice we had with him, he’s physically more gifted than he was advertised.”