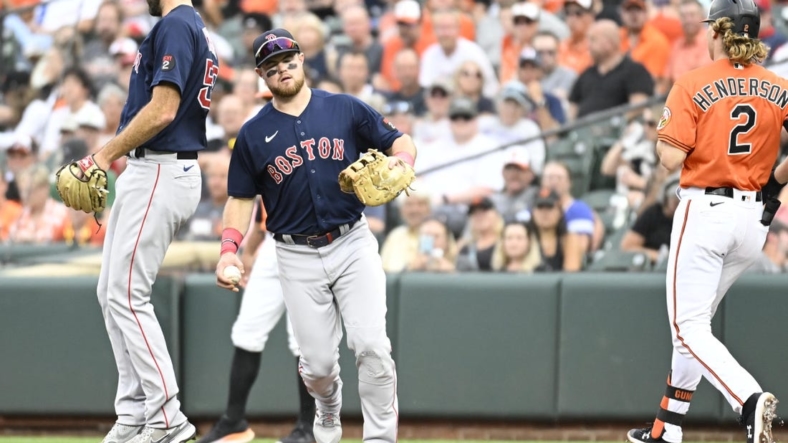 Enrique Hernandez went 4-for-6 and Rafael Devers hit a first-inning grand slam as part of a five-RBI night to jump-start the Boston Red Sox in Saturday’s 17-4 rout of the host Baltimore Orioles.

Christian Arroyo also homered as one of eight multi-hit batters for Boston (68-72), which had lost four straight to begin its current six-game trip.

Red Sox starter Michael Wacha (11-1), who hasn’t lost since May 31, struck out five and scattered six hits across six innings of three-run ball.

Cedric Mullins and Ryan Mountcastle each went 2-for-4 for the Orioles (73-66). Mullins, who homered and had two RBI, has five hits in the last two games.

The Red Sox worked Lyles early, scoring four on the Devers grand slam before an out was recorded in a 37-pitch first inning. Tommy Pham worked a leadoff walk on nine pitches, Alex Verdugo lined a single to center, and Xander Bogaerts was hit by a pitch to load the bases.

Wacha worked around Anthony Santander’s two-out single in the opening frame and retired eight of the first nine batters he faced, but Mullins got Baltimore on the scoreboard with a two-out solo homer to right-center in the third.

After a Bogaerts single chased Lyles, Devers and Story logged back-to-back RBI singles to make it 8-1.

In the fifth, Arroyo sent a two-run homer out to left after J.D. Martinez hit a leadoff double as the Red Sox extended their lead to 10-1. The Orioles got two runs back on Jorge Mateo’s sacrifice fly and a soft Mullins single into left.

The teams traded eighth-inning runs on singles by Story and Mountcastle.

Boston scored six runs in the ninth on four RBI singles, including one by Connor Wong, and two bases-loaded walks.

Pham left in the fourth with a left-shin contusion. He is day-to-day because of the injury.