Emotional Nick Saban: Tua Tagovailoa one of the only players I’ve loved 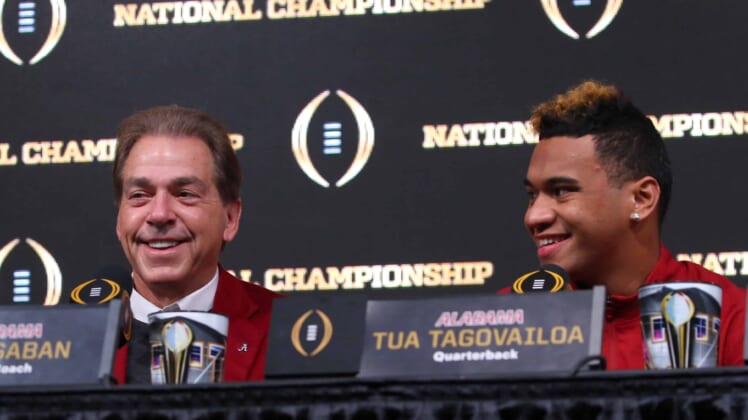 Tua Tagovailoa underwent successful hip surgery on Monday after suffering a season-ending injury Saturday that has Alabama head coach Nick Saban and his team hurting in a big way.

Saban admitted Monday that the entire team is feeling this loss keenly while offering effusive praise for Tagovailoa, who lifted Saban’s spirits during a phone call Saturday night.

“We lost a great leader, a great player on our team and we’re all hurting because of it,” Saban said Monday, per Charlie Potter of 247 Sports. “Just like any time you lose somebody in your family, for whatever reasons, everybody in the family is hurting. And this is all about people and this is all about the person.

Saban isn’t lying about Tagovailoa being “positive about just about everything he does.” Check out this video of the young man strumming a ukulele and singing from his hospital bed.

It’s this special quality that has earned Tagovailoa a very rare place in Saban’s heart. He admitted that his love and appreciation for Tagovailoa runs much deeper than it has for almost all of his players over the years.

“You want to be fair and honest with all players and you’d like to say you treat them all the same, but that’s probably not the case,” Saban said. “And I can think back to four or five players and actually can say I really love those guys as people, the way they did things, the contribution that they made, how they affected other people, and Tua would be one of those four or five guys.”

That’s a pretty remarkable quote from one of the best coaches of all time. It truly shows just how much Tagovailoa has meant to Saban on a personal level, quite aside from anything he’s done on the gridiron.

Saban continued to praise Tagovailoa as “just a fabulous person, a really good player, really cares about his team and his teammates and haven’t had one issue or problem with him since he’s been here.”

He also said that he “can’t say enough good things about him and his family and the impact that they’ve had on the program.”

When asked about the shocking injury that occurred late in the second quarter Saturday, Saban said he’s not second-guessing his decision to let Tagovailoa play.

“… I’m not second-guessing the fact that we played him. What if we wouldn’t have played him and not won the game? I mean, how can you assume that you would win a game by not playing your best players? I’ve never, ever done that and don’t intend to do it in the future, because that’s the only way you can be fair to players and that’s the only way that you can be fair to the team.

The injury Tagovailoa suffered had absolutely nothing to do with his previous ankle injury. Saban called it a “freak injury” on Saturday after it happened, and medical experts agree with that assessment.

Now all anyone can hope for is that Tagovailoa has a swift recovery. The good news is that his surgeon has stated that a full recovery is expected.