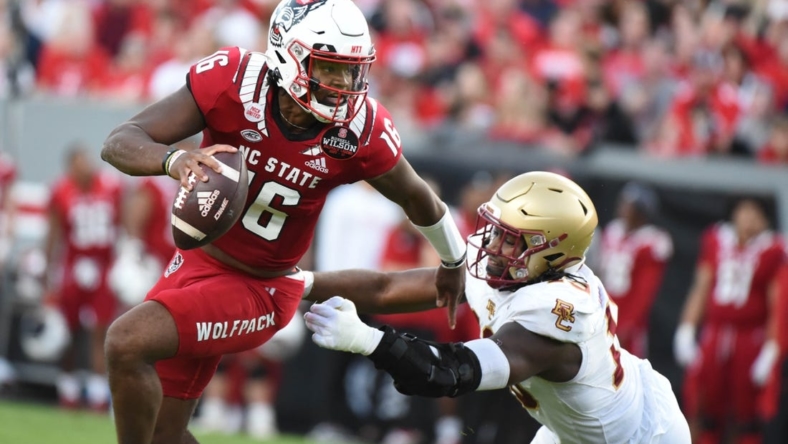 Morehead completed 29 of 48 passes with two interceptions for the Eagles (3-7, 2-5 ACC) as they snapped a four-game slide. The Eagles also broke a 15-game losing streak to ranked opponents.

Zay Flowers was Morehead’s top target as he hauled in seven catches for 130 yards and two touchdowns.

To add another layer to Boston College’s shocking victory, the Eagles won while rushing for minus-one yard on 23 carries.

NC State (7-3, 3-3) saw its 16-game home winning streak at Carter-Finley Stadium come to an end. Had the Wolfpack won this game, the streak would have set a new program record.

Boston College trailed by as much as 13 points. They moved ahead with a 12-play, 69-yard drive that took two minutes and 33 seconds. The drive was capped off by Morehead’s short touchdown pass to Griffin.

NC State tried to respond, but threw an incomplete pass and was then flagged for an illegal forward pass that was caught by a Boston College defender.

NC State scored on each of its first two drives to take a 14-0 lead in the first quarter. MJ Morris — making just his second career start — found Trent Pennix Jr. for a 27-yard score, and then Morris had a 10-yard scamper for the second touchdown.

Morris finished with 135 passing yards while completing 12 of 24 passes. He also rushed for 22 yards. Michael Allen paced the rushing attack for NC State with 77 yards on 14 attempts, while Jordan Houston rushed for 71 yards on 14 touches.

After a Boston College score, NC State’s Christopher Dunn connected on a pair of field goals — from distances of 30 and 45 yards — to put the Wolfpack up 20-7. With the second kick, Dunn became the ACC’s career leader in field goals made with 89.