Emiliano Grillo eagled the 631-yard, par-5 second hole and added six birdies to record a second-round plus-17 and take the lead Friday at the Barracuda Championship, the PGA Tour’s only Modified Stableford event.

At +29 through two rounds at Tahoe Mountain Club’s Old Greenwood Course in Truckee, Calif., the Argentine is two points ahead of Adam Schenk, who had the round of the day at +19. First-round leader Joel Dahmen slipped to third at +26.

The Modified Stableford scoring format encourages aggressive play. The objective is to finish with the highest score, with eagles worth five points, birdies worth two points and a par netting zero. Players are docked one point for a bogey and three points for a double or worse.

Grillo’s second shot at No. 2 bounced from the fairway onto the green and left him pin-high for a modest eagle putt, part of a birdie-eagle-birdie start to his round. 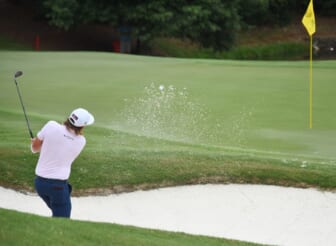 The 28-year-old is the highest-ranked player in the FedEx Cup standings (42nd) playing the Barracuda, with most world’s best players instead competing at the WGC-FedEx St. Jude Classic. Grillo is in search of his second career victory and first since 2015; his best finish this season was a tie for second at the RBC Heritage in April.

Schenk, the No. 219-ranked player in the world, was the only player to best Grillo’s round. Seven birdies plus an eagle at the par-5 sixth hole lifted Schenk to +19 for the day.