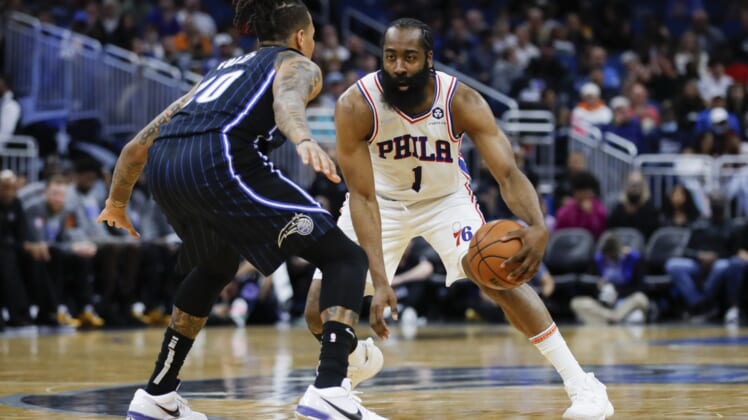 Joel Embiid had 35 points and 16 rebounds, Tobias Harris scored 26 points, including a key 3-pointer late in overtime, and the Philadelphia 76ers overcame a 17-point first-half deficit to defeat the host Orlando Magic 116-114 on Sunday night.

Harris hit a corner triple with 31.7 seconds to go in the extra period as the 76ers pulled ahead 114-113. Orlando’s Franz Wagner made one of two free throws with 9.2 seconds remaining as the Magic closed within 115-114, and James Harden sank his 13th foul shot of the game with 6.7 seconds left to give Philadelphia a two-point cushion.

The Magic worked the ball to Cole Anthony on their possession, but Matisse Thybulle contested the second-year guard’s long 3-point attempt as time expired. Anthony scored nine of his 19 points in overtime, including all three of his 3-pointers.

Harden finished with 26 points, making 13-of-15 free throws, on 5-for-19 shooting. He also had six rebounds, six assists and three steals as Philadelphia improved to 6-1 with Harden wearing a Sixers uniform.

Harris also pulled down nine rebounds. Georges Niang made four 3-pointers and scored 16 points off the bench as the Sixers defeated Orlando for the eighth straight time and completed a four-game season sweep.

Philadelphia outscored Orlando 30-24 in the fourth quarter, but Tyrese Maxey (10 points) missed a 3-pointer from the right wing on the final possession of regulation with the teams tied at 104.

Embiid (seven assists) hit 15 consecutive free throws, before missing his final two, as Philadelphia made 32-of-37 attempts as a team.

Wendell Carter Jr. totaled 23 points and 12 rebounds, but Orlando missed an opportunity for its first three-game winning streak this season. Markelle Fultz dished out a season-high 11 assists and had eight of Orlando’s 51 bench points.

The Magic withstood a wave of Philadelphia free throws by making 18-of-43 3-pointers.

Orlando missed nine consecutive field goals to start the third quarter, allowing the Sixers to erase a 12-point halftime deficit and tie the score at 63. The Magic responded with a 9-0 run en route to an 80-74 lead after three quarters despite the Sixers going 9 of 9 at the free-throw line during the period.