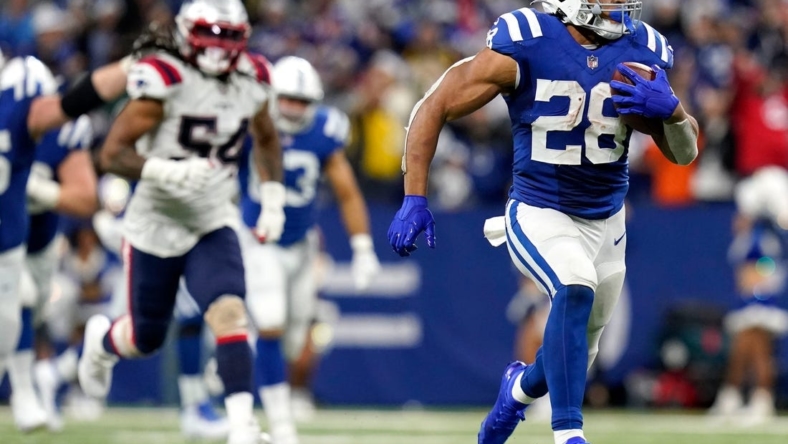 It’s pretty safe to assume that the Indianapolis Colts will still be navigating through a number of personnel changes when they travel to Foxborough, Mass., on Sunday for a meeting with the New England Patriots.

Over the past two weeks, the Colts (3-4-1) have benched quarterback Matt Ryan, parted ways with offensive coordinator Marcus Brady and traded running Nyheim Hines to the Buffalo Bills.

“I’m not naming an interim coordinator. I’ll handle those duties, I’m the play caller,” Indianapolis coach Frank Reich said. “Ultimately the offense falls on my shoulders. It’s a collaborative effort for sure, but myself and the coordinator always are central to that game planning process and play calling is obviously my deal.”

To say things are hectic in Indianapolis right now would be an understatement.

All that change comes at a time when Sam Ehlinger, who took over for Ryan under center, is trying to find his footing in the NFL.

Ehlinger made his first career start last Sunday against the Washington Commanders and completed 17 of 23 passes for 201 yards. Hines provided the Colts’ only touchdown in what ended up being a 17-16 loss.

Indianapolis’ offense continues to struggle, and the Colts have only scored more than 20 points in one game this season. A lot of those hardships stem from the Colts’ failure to effectively run the ball behind running back Jonathan Taylor.

Zack Moss will be joining Taylor in the backfield after coming over from Buffalo in the Hines trade, but Taylor is going to have to shoulder the load if the Colts’ offense is to enjoy a resurgence.

However, Taylor is working through the ankle injury that held him out of Wednesday’s practice and two games earlier this season. He re-aggravated the ankle against Washington last Sunday.

Despite usually being equipped with a formidable defense that is anything but kind to the run, the Patriots (4-4) have allowed the 11th-most rushing yards per game (126.0).

That average was even higher before they suffocated the New York Jets’ ground attack during last Sunday’s 22-17 victory. Four ball carriers combined for just 51 yards on 15 carries in what ended up being Bill Belichick’s 325th win (regular and postseason), making him the second-winningest coach of all-time behind Don Shula (347).

While that’s quite the accomplishment, the time for celebration is over, and New England’s attention has shifted to Sunday’s contest with Indianapolis.

“It’s a well-balanced team,” Belichick said of the Colts. “I think they’ve put together a solid roster that has good players in pretty much every position. … It obviously starts with Taylor, and (Michael) Pittman, the offensive line, coach Reich, play calling, scheme — they do a good job.”

The Patriots could be without center David Andrews (concussion) and running back Damien Harris (illness), as both missed Wednesday’s practice. Wide receiver DeVante Parker was also a non-participant with a knee injury.