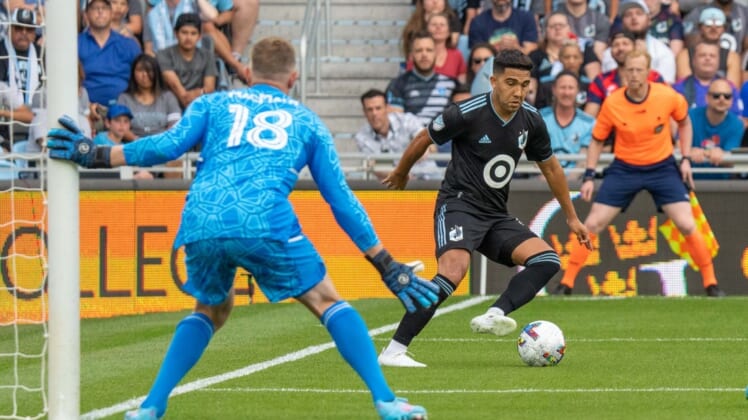 Emanuel Reynoso had two goals and an assist to lead Minnesota United to a 3-2 victory over Real Salt Lake on Sunday night in Saint Paul, Minn.

Luis Amarilla also scored for the Loons (7-8-3, 24 points), who moved into a tie with the Los Angeles Galaxy and Vancouver Whitecaps for seventh place and the final playoff spot in the Western Conference. Dayne St. Clair made two saves.

It was the second straight game that Reynoso scored a brace. The midfielder from Argentina has scored five goals in the last four games.

Minnesota United controlled the first half of the contest — outshooting RSL 10-4, including 4-1 in shots on goal — while building a 2-0 lead.

Reynoso made it 1-0 in the ninth minute when he dribbled around two defenders and then fired a left-footed shot from the right side of the box past MacMath and into the left corner of the net.

Real Salt Lake had two good chances to tie it. The first came in the 19th minute when Savarino hit Sergio Cordova with a crossing pass on the left side of the 6-yard box but Cordova’s left-footed shot sailed over the crossbar.

St. Clair then came up with a diving two-handed save in the 29th minute on Pablo Ruiz’s curling left-footed shot from outside the box that was headed for the top left corner.

Reynoso made it 2-0 in the third minute of stoppage time. Aaron Herrera was called for a tripping foul on Reynoso on the left side of the box, resulting in a penalty kick. MacMath made a diving save on Reynoso’s left-footed penalty try toward the right corner, but Reynoso followed up and easily tapped in the rebound for his seventh goal of the season.

Minnesota had a chance to increase its lead make in the 48th minute when Reynoso set up Robin Lod near the right edge of the six-yard box but Lod’s right-footed shot bounced off the right post.

Amarilla then made it 3-0 in the 61st minute when he took a breakout pass from Reynoso down the middle of the field and chipped a right-footed shot over MacMath for his fourth goal of the season.

RSL cut it to 3-1 in the 71st minute when Savarino slid in front of a defender to redirect Maikel Chang’s crossing pass in the 6-yard box with his left foot for his second goal of the season.

Julio made it 3-2 five minutes later when he headed Savarino’s corner kick from the middle of the 6-yard box inside the right post for his first goal of the season.