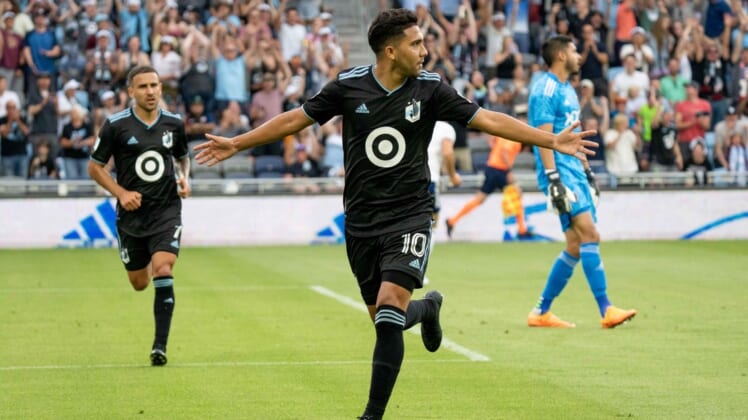 Emanuel Reynoso scored two goals and Luis Amarilla had a pair of assists as Minnesota United extended its unbeaten streak to a season-best five games with a 2-0 victory over D.C. United on Saturday night in Saint Paul, Minn.

It was the third brace in five games for Reynoso, who was selected to play in the MLS All-Star Game earlier in the week.

Dayne St. Clair, who will join Reynoso in the All-Star Game, picked up his fourth clean sheet of the season for the Loons (9-8-4, 31 points).

The Black-and-Red, playing their fourth game in the span of 13 days, were without top goal scorer and All-Star forward Taxi Fountas (10 goals in 12 games), who didn’t make the trip with a minor injury.

After rallying in stoppage time for a 2-2 draw with the visiting Columbus Crew on Wednesday, D.C. United had a chance to take the lead in the 11th minute, but Kimarni Smith’s header from the edge of a 6-yard box off a Steven Birnbaum headed pass sailed over the crossbar.

Minnesota United then took a 1-0 lead two minutes later when Reynoso took a nifty mid-air back-heel pass from Amarilla in the middle of the box and fired a left-footed shot past Romo inside the right post.

Reynoso and Amarilla teamed up again in the 50th minute to make it 2-0. Reynoso made a run near the top of the left side of the 6-yard box, where he redirected Amarilla’s pass with his left foot into the far side of the net for his ninth goal of the season.

Wayne Rooney, named D.C. United’s new head coach on Tuesday, watched the game from the stands while he waits for a work visa to be granted. Assistant Chad Ashton served as interim head coach for the Black-and-Red.