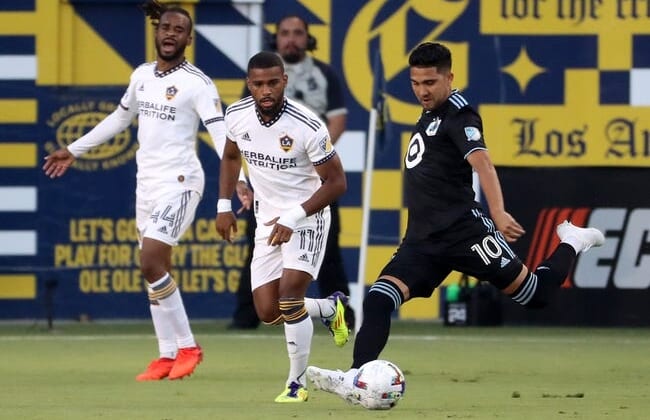 It was Minnesota’s first win in five tries at Dignity Health Sports Park (1-2-2).

Galaxy forward Kevin Cabral was sent off in the 25th minute after trying to leap over Loons goalkeeper Dayne St. Clair on a scramble in the box, but his cleat made contact with St. Clair’s head.

Reynoso opened the scoring in the ninth minute after cutting in from the right side onto his left foot and curling a shot inside the left post from outside the box.

After Cabral was sent off to the impassioned complaints of the home crowd and Galaxy head coach Greg Vanney, it would take Minnesota only 11 minutes to double their lead.

Fullback Kemar Lawrence raced down the left side of the field and hit a curling cross with his first touch into the path of Franco, who lashed it into the top of the goal.

Reynoso would make it 3-0 to the Loons in the 43rd minute after substitute Bongokuhle Hlongwane got into the box and laid it off to the oncoming Reynoso. He struck it with his first touch and Galaxy goalkeeper Jonathon Bond had no chance.

Despite giving up three goals on six shots on target, Bond was not responsible for any of the goals his team gave up. His counterpart, St. Clair, stopped five of seven shots on target.

To start the second half, halftime substitute Efrain Alvarez made an impact as the Galaxy sustained attacking effort and energy.

As the game neared the 60-minute mark, Chicharito was able to get behind the Minnesota defense but St. Clair was able to redirect his shot for a corner kick.

Alvarez then drew a penalty off the corner sending Marky Delgado to the penalty spot. Delgado sent St. Clair the wrong way and put it into the bottom right corner to make it 3-1 in the 59th minute.

It looked like the Loons would make it 4-1 on the break in the 81st minute, but Bond kept Fragapane from getting his brace with a hard-charging save. Fragapane was denied his brace in the 87th minute after it looked like he scored on a rebound off Bond and the post, but the goal was immediately waved off for offside.

Dejan Joveljic, the Galaxy’s super-sub as of late, scored three minutes into extra time off a feed from Douglas Costa to draw the hosts within one. Despite late chances, the Glaaxy could not manage to get the tying goal.

At the whistle, Costa kicked off a fracas with a forearm to the back of Joseph Rosales’ head. Rosales retaliated and the benches cleared, but order was quickly restored. Rosales picked up his second yellow for the retaliation resulting in a red, while Costa initially was shown yellow before VAR upgraded it to a red card.